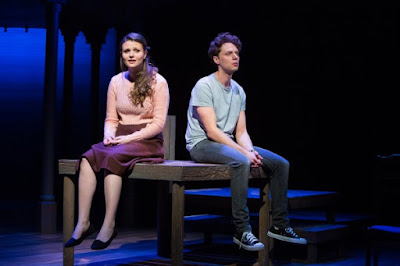 at the New Wolsey Theatre, Ipswich


for The Reviews Hub

Rumoured to be based on the writer's own marriage woes, this charming chamber musical fits the Wolsey like a glove.
The structure is ingenious, with more than a hint of I Do, I Do and Merrily We Roll Along. Bride and groom meet – and duet – somewhere in the middle; otherwise their timelines move in opposing directions, giving an ironic twist to past and future passions.
In Peter Rowe's fluid, uncluttered production, both characters are frequently on stage together, sometimes interacting, sometimes not. Which makes even greater demands on the actors, and the audience, since time shifts in an instant, as Cathy and Jamie dart around their five year relationship.
Katie Birtill and Chris Cowley both inhabit their roles with conviction, with plenty of vocal power and engaging presence. She, the loser in this love match, eliciting rather more sympathy than he does, as he unattractively eyes up “other women” almost as soon as the knot is tied. But in the end it's work – he's a flavour-of-the-month novelist, she an aspiring actor – that comes between them. She stands starry-eyed stage right as he pens a last letter and packs up his things. Just ninety minutes before – straight through, no interval - he falls naively in love, delighted to be dating outside his faith, (he's seen “every Shapiro in Washington Heights”), as she laments the end of her marriage in “Still Hurting”.
As in Tell Me On A Sunday, the musical numbers are more like a song cycle than a sung-through show. Charming pastiches, not stinting on a good tune; like Sondheim, Brown knows how to tell a story in witty, snappy lyrics. A very stylish band – ready for a Schubert quintet, by the look of them – with MD Caroline Humphris at the grand piano. Some lovely numbers, though nothing to whistle on the way home. “Summer in Ohio”, about Cathy's awful experience in summer stock, the Chorus Line moment as she auditions, using a wonderful homage to the Great American Musical (“When You Come Home To Me”).
The staging is simple and intimate – magical fairy lights for the opening, soft spotlights for the solos, a table doubling as a pier on the lake, a love boat either side of the wedding, with her dialogue cleverly mirroring his as she retreats into the past. The moments when the two young lovers are happy in each other's company are a rare treat: standing together like the couple on the cake, Cathy sitting rapt and cross-legged as Jamie acts out his Christmas story of the tailor Schmuel before making her a present … of a watch.