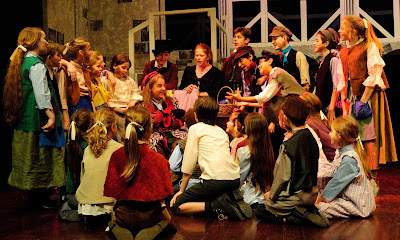 
A tremendous Oliver! from Billericay Operatic. The whole stage used to excellent effect, with thirty orphans banging their bowls of gruel on the floor. Consider Yourself, too, a great success, with the street traders joining in as Fagin's den, kettle on the hob, is unobtrusively set behind.
Lots of other felicitous staging moments – the pick-pocket chain, the dramatic close to Act One, Who Will Buy, the adoring urchins at the end of I'd Do Anything. Jane Granby the choreographer.
Wayne Carpenter's ebullient production boasts some impressive performances, not least his own in the role of Fagin, long hair, goatee beard. Nancy is compellingly played by Sian Hopwood – blowsy with a big voice for the torch song, but touchingly dreaming of the domestic bliss she'll never know. MD Andy Prideaux is her leering Sykes.
A copybook cameo from Freda Timms as Old Sally, a knockabout double act from Bob Southgate and Gail Carpenter – a naughtily bawdy climax to I Shall Scream, a saturnine Sowerberry from Mark Clements with Annabel Lowman as his harridan of a wife.
Oliver and Dodger double cast: I saw Hamish Baumber as a convincingly vulnerable orphan, twice left alone and friendless, with Jack Beazley as his older, wiser mentor. Nice work from Charlie, too, uncredited in the programme.
Andy Prideaux's band, tucked away at the side, play their hearts out from the atmospheric overture to the last glorious encore.
on Monday, March 14, 2016