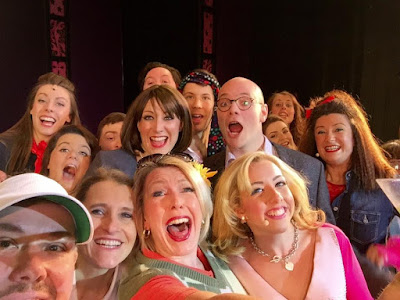 
Unaccountably more popular on this side of the Pond than in its Stateside home, Legally Blonde is a fluffy, feel-good fun show, winner of several Oliviers.
Far-fetched, even by fairy-tale standards, it follows the feisty sorority girl Elle as she charms her way into Harvard to win back her law student boyfriend. And, true to herself to the end, she forges a high-profile career in the courts using little more than feminine intuition.
It's given an energetic, infectiously enjoyable production by Sallie Warrington, with high-octane performances from a huge cast.
Keeley Denman is the dynamo Elle, owning the stage as she owns the interview room and the high court. Her snobby boyfriend is done with smooth assurance by Jacob Burtenshaw, the exact opposite of teaching assistant “Chip on my Shoulder” Emmett [David Gillett], who's on Elle's side from the start, and, to no-one's surprise, ends up proposing to her in the final scene. Great character support from Robyn Gowers as Paulette the beautician, Claire Carr as the evil preppy Vivienne and Patrick Tucker as “Blood in the Water” Callahan.. And there's a fitness queen [Becki Wendes], a hunky UPS boy [Brad Wendes], two cute dogs and an eye-catching triple whammy from Ian Gilbert... But it's the ensemble who carry the show, adding value to the vacuous numbers – the Riverdance pastiche and the jumping rope sequence [Jenny Gayner] just two of the memorable production numbers. An upbeat pit band pumps the score along nicely, under the direction of Robert Wicks.

Great to see so many youngsters – on both sides of the footlights – in the sold-out Civic for this hit Noughties musical. Just what's needed to keep this august society in the pink ...
on Sunday, March 06, 2016