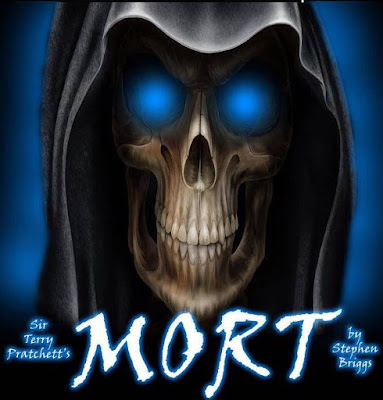 
Mort is the eighth of the Pratchett oeuvre to grace the Old Court stage. Giving real playwrights like Ayckbourn and Shakespeare a run for their money.
Stephen Briggs' respectful adaptation uses narration sparingly; he shoe-horns in all the familiar characters and most of the best jokes. The tone is set before the show, with the catchy, bawdy Wizard's Staff song, attributed to Nanny Ogg.
Lynn Foster, who directs, assisted by Mark Preston and Sally Ransom, deploys her huge, richly costumed cast with skill: processions, carnival, time travel.
Robin Winder's set allows for dramatic entrances, as well as opening out to reveal a perspective view of Death's library, shelf after shelf of biographies and hourglasses.
The disc-world cast is led by Michael McDonagh as the hopeless apprentice of the title, with Richard James as his master, the cadaverous, sepulchral Grim Reaper. On the distaff side, Jennifer Burchett's gothic “I shall call you Boy” Ysabell, and Natalie Patuzzo's nubile Princess.
What laughs there are tend to go to those actors who aren't afraid to send it all up a bit – Mark Preston's Rincewind, Peter Jeary's Cutwell, Jim Crozier, outstanding as the old retainer Albert, who turns out to be none other than Alberto Malich - you know, the onlie begetter of the Unseen University. And not forgetting the scenes stolen by Robin Winder as Cyrus, a merrily myopic High Priest, and, best of all, a stoical door knocker.

For the record the score works out at Terry Pratchett 8 and Bard 10 over 21 years and 3 months since CTW did its first Pratchett.