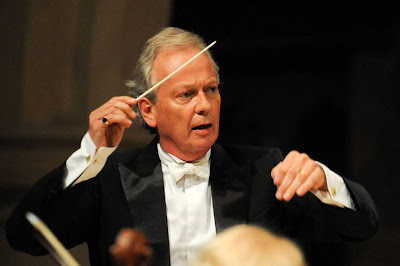 A very popular concert to start the season, with a programme of favourites and one of this country's finest pianists at the helm.

Directing from the Japanese piano, Howard Shelley gave a bright, lively performance of the familiar Grieg concerto. As he points out, it's easier to keep this repertoire fresh if you're conducting as well as playing, and there was certainly no hint of staleness here: an imposing opening, followed by a jaunty development and a very rich cadenza. The instrumental introduction to the Adagio was played with a beautifully blended orchestral palette, the piano entry finely judged.

Before the Grieg we heard Mozart's Don Giovanni Overture, performed with very positive attack and dramatic urgency. And after it, the celebratory euphoria of Beethoven's Seventh Symphony. Pleasing to hear the various voices so distinctly; the playful Vivace followed by an energetic Allegretto, with a thrillingly muscular Allegro con Brio to finish.

A bonus was the informative, and witty, pre-concert talk, including Spohr's reminiscence of playing the Symphony under Beethoven's baton, and Mozart writing his overture the night before the performance, kept going by pots of ale and the gossip of friends.

The next concert, in February, features Sinfonia Viva in Schubert, Haydn and Mozart.
on Thursday, November 22, 2012