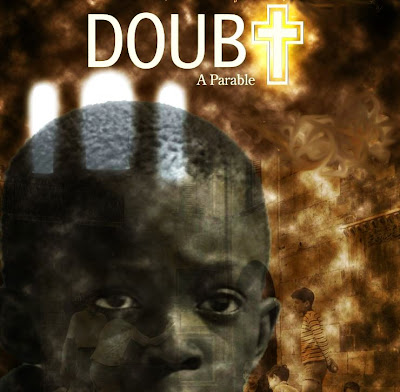 John Patrick Shanley's award-winning play exposes conflicts within a church school: a priest is accused of inappropriate friendship with a vulnerable boy, the first Black student in the school. [This is the Bronx in 1964.]

Performed in one act, the piece is designed to provoke discussion and debate – Act Two in the bar afterwards, perhaps.

She has three fine actors to perform the parable. Paul Sparrowham is the tormented soul, struggling with his accusers and his conscience, preaching charismatic sermons as commentary on the action. His confrontation with the cold, intolerant, old-fashioned principal, Sister Aloysius [played not without warmth and humanity by Glenda Abbott] was powerfully dramatic. Contrasted with Aloysius was Sister James [Louise Bridgman], an idealistic young teacher who first, innocently, sows doubt in the older woman's mind, and "something is set in motion".

Despite its success, I found the play a little contrived, and wordy at the start, the two women too tentatively drawn. But Heads First's sincere treatment enabled us to share this exploration of suspicion, compassion and innocence, which is only incidentally about scandal within the Church of Rome.
on Thursday, November 22, 2012