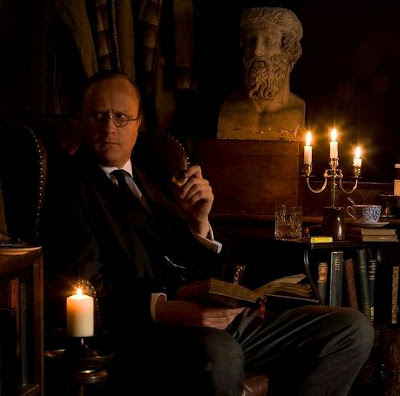 To mark MR James's 150th anniversary, Robert Lloyd Parry can't resist adding a coda to his Ghost Story Trilogy – two more tales from the master of the genre, both set in Northern Europe, and both from the earliest collection, first published in 1904.

In the Cramphorn darkness, four candles gutter, their flames reflected in glassware and spectacles. This is the only light for this atmospheric one-man show; Mr Lloyd Parry, the embodiment of the Provost of King's in his gloomy study, the only actor. Those ghostly figures behind him just overcoats on a hat-stand.

Number 13, set in Viborg, is an intriguing tale of an inn; the landlord and the lawyer next door both skilfully brought to life.

Count Magnus [a real historical figure, apparently] in the second story is the sadistic, satanic Swedish Count whose remains are unwisely disturbed by the over-curious Mr Wraxall, a travel writer who is pursued to deepest Essex by the spectre of Magnus and his diabolical companion, to meet his demise at Belchamp St Paul.

The Dies Irae crashes in, the houselights come up, and we can breathe again. Though a niggling memory of the dancing devil and the hooded fiend will stay with us long after Lloyd Parry has moved on to Bath, Buxton and Hemingford Grey …
on Saturday, November 10, 2012