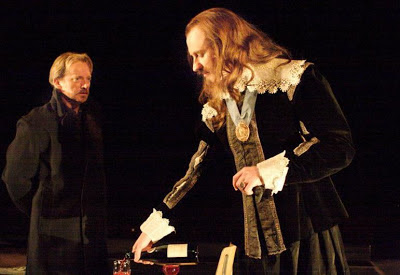 Only the King wears his own clothes.
All the others, Presbyterians, Levellers, Counsellors and the two women, are all dressed somewhere in the middle of the Twentieth Century. Ashley Martin-Davis's grim traverse set suggests a corridor of power, with overflowing filing cabinets, in Whitehall, maybe, or Westminster, scenes of the military coup of 1649.

Like Brenton's earlier success, Anne Boleyn, 55 Days dissects a turning point in history, and takes us back to a world where religion was central to the lives of rulers and commoners alike.

The action is swift, brutal in Howard Davies's gripping production. Allegiances, ambitions are far from fixed – "everybody twists about" – stability is a dear, distant dream. A bell tolls for Evensong in the chapel at Carisbrooke, Cromwell is at his ablutions above a Knottingley tavern. And most chillingly effective of all, the noisy meetings and the attempt at a trial. A very real sense that decisions are made, policies forged, on the hoof. "We are not just trying a tyrant, we are inventing a country, " Cromwell says. The lawyers that the Parliamentarians enlist are unsure, torn between statute and revolutionary zeal. [Excellent performances from Tom Vaughan-Lawler and James Wallace, who also plays Richmond in the earlier scenes.]

Cromwell is a strong, determined but ultimately reasonable Douglas Henshall. Mark Gatiss his proud, remote, arrogant monarch. A glass of wine symbolises a meeting between them [which happens, like Tyndale's tryst with Boleyn, only in the dramatist's imagination]. Charles's rejection of his advances suddenly triggers an angry decision, the trial and the execution.

There are echoes of the earlier play in the humour, the names [Thomas, Lady Anne, Cromwell] and in Brenton's unique gift for heightened yet realistic historical dialogue. He captures the turbulence of the times, and makes complex political, social and religious ideas not only accessible but real and relevant.