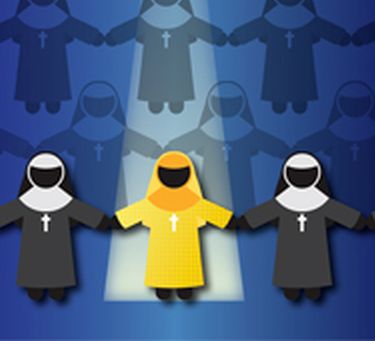 SISTER ACT
SODS
at the Palace Theatre, Westcliff
14.11.14
for Sardines

The stage show was slow to follow the family favourite film, coming at last to Broadway by way of the London Palladium. SODS have secured the regional premiere, and Ian Gilbert's production is a stunning success, bringing the distinctive blend of gospel and gangsters to vibrant life.
The show is spectacularly lit; the frocks are spot on, from the awful 70s threads to the lamé and sequins on those Act Two habits. But the staging is necessarily simple, with a spaghetti curtain on which are projected stained glass and mirror ball, Last Supper and dart board.
Not the greatest show – succeeding on the movie's coat-tails and the Goldberg effect. Only one memorable number, though Alan Menken's score does have some enjoyable pastiches, and wonderful opportunities for the singers. The plot is clunky, the story coarser than on celluloid. But, by heaven, you certainly feel entertained by the end of it, especially when the cast is as talented, the staging as assured as it is at the Palace this week.
Sharon Rose has been singing professionally since childhood, but Deloris van Cartier is her first dramatic role. She takes to the stage like a duck to water – she has a warm, sparky presence, and handles the dialogue as convincingly as the singing and the dancing, of which she has plenty. A stand-out, star performance; let's hope it won't be the last time she's cajoled onto the boards. Ben Huish is a fresh-faced Sweaty Eddy, a match in charm and star quality for his “wayward woman”.
There's lots of fun to be had with the gangland buffoons [Jon Buxton's confident Curtis their boss], with especially compelling comedy from Declan Wright as TJ. Great character work, too, from those game sisters, notably Liz Green as Mary Lazarus and Charlotte Cox as the confused young postulant: her Life I Never Had a thoughtful triumph.
SODS stalwarts – well over a hundred roles between them - take the key characters of the Mother Superior [Ann Barber, in fine voice, making the most of the outrage] and Monsignor O'Hara, an early and shamelessly enthusiastic convert to the new order [Dick Davies, cavorting in his colourful cassock].
The ensemble work is impressive [choreography by Vicky Wyatt] – all those “celibate nuns shaking their buns” - and there are lots of ingenious ideas – the turn-and-change transformation at the end of Act One, the ghostly nuns in their pyjamas, the chase sequences, the camp choirboys [are these the bachelor antique dealers?] who get to ascend to the circle boxes, the kitsch fantasy dancers for Fabulous, Baby!.
Ashton Moore conducts with a keen sense of the seventies style that permeates this show.
on Sunday, November 16, 2014