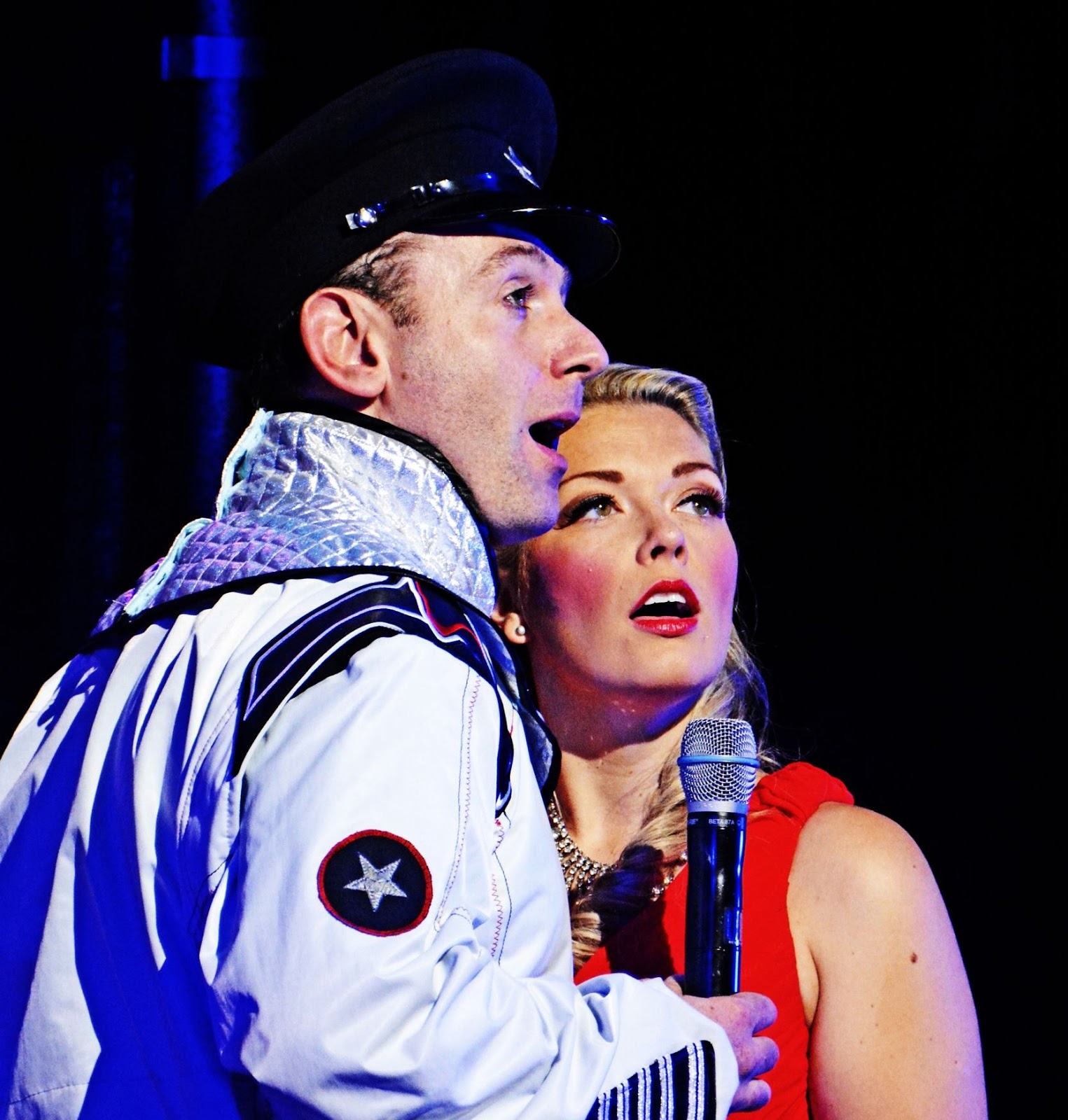 RETURN TO THE FORBIDDEN PLANET
Cut to the Chase at the Queen's Theatre, Hornchurch
10.11.2014
for The Public Reviews

Artistic Director Bob Carlton is bowing out after 17 years at the Queen's Hornchurch. And what better swan song than his Olivier award-winning musical, making its umpteenth appearance here before launching a national tour and finally splashing down in Manchester next May.
It's a heady mix of Shakespeare, science fiction and classics from the fifties. You probably have to love all three, and know your way around, to really appreciate every nuance. And Mr Carlton almost certainly fits that demographic …
Against a simple set – somewhere between “Space:1999” and a rock festival stage – the timeless story plays. The low-tech gadgetry [hairdryer space guns, bubbles, the wobbly shuttle-craft maquette] all part of the period charm. And despite the efforts of the enthusiastic audience, the reverse polarity never quite “fully operational”.
Mostly in blank verse, Shakespeare, cod and kosher, cleverly tweaked to fit the sci-fi scenario, and including some outrageous word-play.
This twenty-fifth anniversary production has some familiar faces, including Mark Newnham's “teenager in love” Cookie, reprising his 2012 performance, including the virtuosic guitar solo to ”She's Not There”, with its ever more extreme riffs.
But not, alas, “Frido” Ruth, due to make his fourth appearance as the walking Coke can, but prevented by a tendon torn in preview. His part is taken, in time-honoured chorus-to-star fashion, by Joseph Mann, making his Queen's début playing trombone and, with just four hours' rehearsal, an engagingly cute Ariel.
Sean Needham is Captain Tempest, his pipe clamped firmly between his teeth, his tongue permanently in his cheek, with trumpeter Sarah Scowen as his Miranda. Christine Holman is a strong Science Officer, later revealed as a pneumatic Gloria. A brilliant Doctor Prospero, too, in Jonathan Markwood, who's played genuine Shakespeare in this house, and has great fun giving us both his Lear and his “King”.
Chorus, not for the first time, was the legendary Brian May, appearing on screen for prologue, interval and epilogue.
The music, arranged by Julian Littman with Greg Last directing from up on the bridge, is always enjoyable, often apposite: Wipe Out, Great Balls of Fire, Monster Mash, Connie Francis's Robot Man and The Byrds' Mr Spaceman. Particularly delicious were The Young Ones, with those Shadows steps, and a wonderful a cappella teenager in love.
Actor/musicians were a breakthrough when the Starship Albatros first made landfall on Planet D'Illyria, and are still a huge strength of the Queen's Theatre's offering. The nine-piece band reminds us of their amazing versatility in the finale, before stepping out of costume and into a rock gig for a celebratory [or self-indulgent, according to taste] energetic encore.
The short run in Hornchurch is a complete sell-out. But fans of this cult classic will be more than willing to travel, if not to D'Illyria, then at least to Dartford or Darlington, for the 2015 tour.