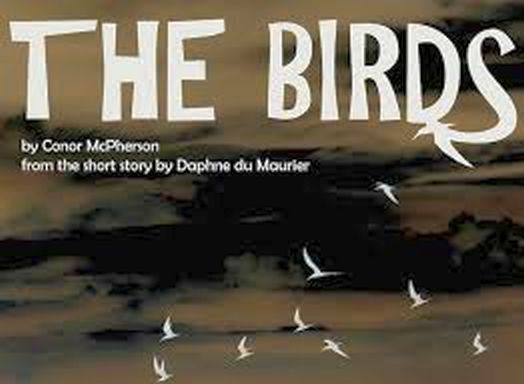 THE BIRDS
Chelmsford Theatre Workshop at The Old Court
19.09.2014

Conor McPherson's bleak apocalyptic drama owes nothing to Hitchcock, and precious little to Du Maurier.
Diane, a writer, is holed up in a derelict cottage near the sea with a man. Each tide brings deadly waves of predatory birds. Civilization has ceased – think Day of the Triffids – with pockets of scavenging survivors battling to stay alive. A fugitive girl joins them, upsets the precarious balance, finds the diary to which the writer confides her thoughts.
McPherson has little gift for character, or for dialogue. The scenes are often short, punctuated by the tides and the birds.
Mike Nower, in the final production of his fine body of work for CTW, has included a prologue, in which researchers from the future explore the cottage and find the diary. And added visual representations of the gulls, crows, whatever, in descending order of effectiveness, as shadowy forms on the auditorium walls, as film, as endlessly revolving projections. They're much more menacing when they're unseen, attacking the boarded windows, flapping and fluttering around the shutters.
Nower has assembled an experienced company, not least Robin Winder in a nice cameo as the mysterious neighbour. Strong performances from Sara Nower and Greg Whitehead as the “couple”, barely communicating as they live in their own worlds, and from Kat Hempstead as fierce, vulnerable Julia.
The set is excellent – solid and convincing, wouldn't look out of place on a professional tour. The house is lit by candles, an open fire and pocket lamps. There's one very successful candlelit scene at the table; elsewhere contours and character tend to be lost in a flat, warm wash.
An interesting, if only patchily successful, take on a classic chiller to start the new season at The Old Court. Next at CTW, for Halloween, The Haunting of Hill House.
on Sunday, September 21, 2014