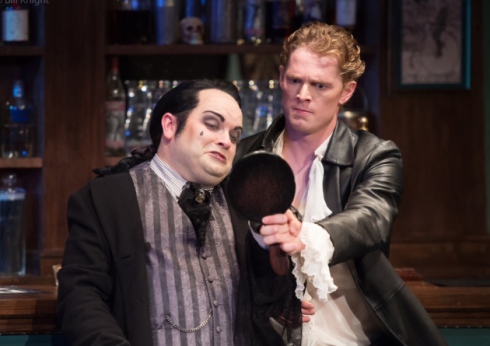 Through the crowded Victorian bar at the King's Head – World Cup misery on the big screens – to another, secret bar out the back . Dartboard on the wall, Adnam's on tap, totally lifelike [all credit to production designer Simon Bejer]. Only the adverts for ghoulish cocktails and poetry readings give a hint of pleasures to come, as Gilbert and Sullivan's Patience is dusted off and updated, tweaked and tactfully trimmed.
John Savournin's brilliantly bold concept takes Castle Bunthorne and rebadges it as The Castle, the village local where the eponymous Patience is the barmaid. The lovesick – sorry, melancholic – maidens are impeccably dressed a la Goth, as they sit on bar stools, knock back the spirits, and sigh and pine for the attentions of fleshly poet Reginald Bunthorne.
Sullivan's score is respectfully treated in the reduction for David Eaton's grand piano [no pub upright for him], and the singing, viscerally vivid in this intimate space, is superb throughout. The “Old Old Love” sestet just one example of melodic delight, with the manly tenor of David Menezes' Duke soaring above the rest.
David Phipps-Davis is wonderful value as a florid, self-absorbed poet – black rose, purple eye-shadow, nicely contrasted with the Greek God picturesque perfection of Henry Manning's Idyllic rival. Joanna Marie Skillett [Cinders last Christmas] is a lively, Nordic Patience. And contralto Amy J Payne [another panto survivor] is a huge hit with the audience as Lady Jane. No cello, alas, but a beautifully done “ageing” Aria, nobly resisting the crisps behind the bar.
Hilarious team-work, and perfect patter, from the Dragoons, Michael Kerry's Major and especially Giles Davies's spiffing Colonel Calverley.
Cheeky concessions to the 21st century include Grosvenor's transformation into a “TK Maxx young man”, with melancholics Helen Evora and Andrea Tweedale becoming thoroughly modern maidens to match. Nothing too incongruous, and all in the spirit of Gilbert, who would, had he lived long enough, have very happily rhymed Sartre with Sinatra.
on Sunday, June 22, 2014