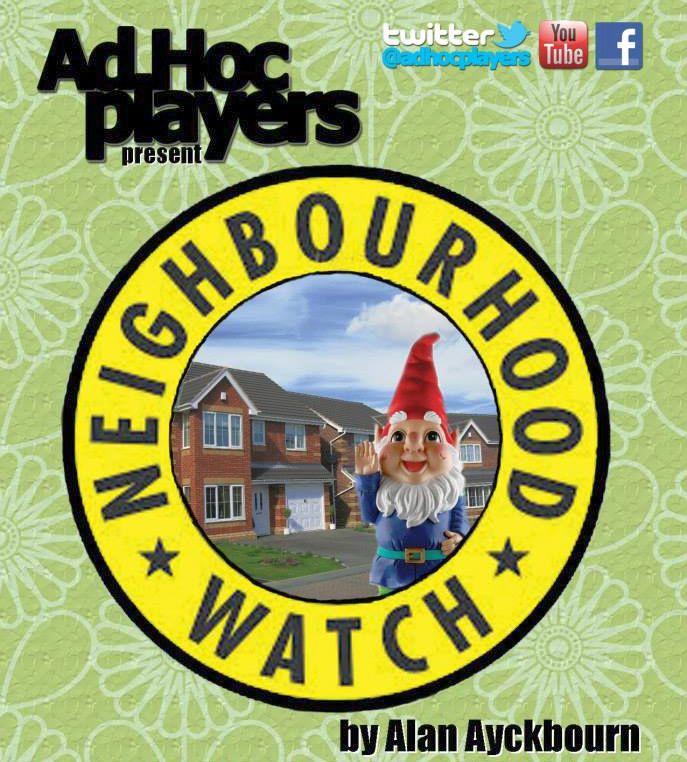 Hayley Joanne Bacon's production raised chuckles of recognition from the first night audience, and although this is far from vintage Ayckbourn, there is some fun to be had from watching the do-gooder Christian siblings [played convincingly by Wendi Sheard and David Lintin] organize their neighbours to fight the perceived threat from the sink estate just down the hill.
Good character support from Shealagh Dennis as the nosy-parker from the local paper, and Paul Carey as the angry little engineer with an unhealthy interest in medieval instruments of torture.

This rather predictable piece, with none of the playwright's trademark theatrical devices, needs a deal of help from the performers, more perhaps than it gets here, where hesitation and uncertainty affect all the actors to some degree.

The challenging opening monologue – a funeral eulogy to the brother lost in a police shoot-out – is confidently done but seems overlong. The closing scene [all the rest is flashback] sees his mansize monument unveiled, but we are left in the dark about the future of Bluebell Hill and its unhinged residents. A sequel from Sir Alan, maybe … 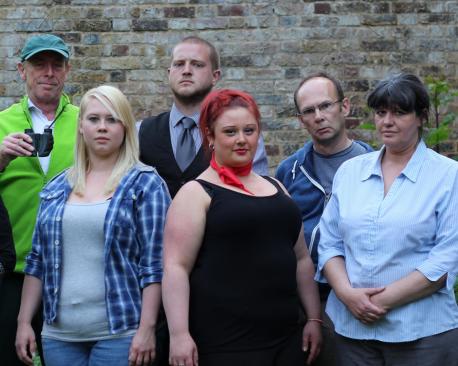 This was Sir Alan's 75th play, and was well received [even by the critics] a few years ago in Scarborough, and in New York.
Hard to see why, based on Ad Hoc's slow-paced production. The unlikely story centres around Hilda and Martin, sister and brother, annoyingly devout busy-bodies [Jesus always lurking in the bushes] who set up a neighbourhood watch group to defend their green and pleasant development from the threat without. Hilda, who has the long funeral prologue, was done with some style by Wendi Sheard, and the pompous Martin was nicely characterized by David Lintin, with more than a hint of that comedy genius Jim Broadbent.
They are joined in their green lounge by assorted neighbours. Good work from Shealagh Dennis as Dorothy, fifteen years on the local rag [though only taking small ads, it transpires] and from Paul Carey as Gareth, forever tinkering in his shed and dreaming up medieval chastisement for his wayward wife [Leanne Gibbs, who had a promising alphabetical duologue with Lintin but elsewhere was often hard to hear].
Rod – ex-army, security mad and a close cousin of Harvey in Season's Greetings – was played by Stewart Goodwin. He has some of the best lines - “The country’s flooded with them … Eastern Europe. Never should have torn down the Iron Curtain. Biggest mistake we ever made.” - but unfortunately had his words [and his eyes] glued to his clip-board. Martin Wilderspin was menacing as Luther, the violent voice of sanity [but an unlikely Guardian reader], with Candy Lillywhite-Taylor as his kindly clarinet-teaching wife.
The room – with its controversial wallpaper – was well furnished, and the fire next door was effective. It was a shame there was no light for the garden and the other rooms; or even a glimpse of the stocks and the razor wire …


Hayley Joanne Bacon's production was sometimes a little static, but had some lovely moments of conflict and [occasional] intimacy. The chief obstacle to our appreciation of this dark, late Ayckbourn was the uncertainty of the actors – no prompts, it's true, but far too much hesitation and approximation. Comedy needs confidence and careful timing.
on Thursday, June 05, 2014

The mystery posed by this production is as follows:- is Alan Ayckbourn losing his touch and following John Godber's well-trodden path of recycling the same play over and over again or is Yorkshire's finest living playwright finally losing his acid touch?
Neighbourhood Watch was so clichéd and uninspiringly boring that the audience could have spoken the lines along with the cast. Mind you that also raises yet another problem.
Whilst leading characters brother and sister Hilda and Martin were given strong, interesting performances by Wendi Sheard and David Lintin, who both carried this production extremely well. They made their stereotypical roles as believable as possible and created some good laughs. Supported in their efforts by Paul Carey's twitchy, neurotic Gareth manufacturing torture implements as a hobby. Luther Bradley's thoroughly unpleasant nature was brought out most emphatically by Martin Wilderspin.
These actors did their best despite a lot of underperforming and underprojecting by other cast members. One of whom read his many lines in a monotone from the script on a clipboard without any attempt to characterise his role. As a result on the first night applause was not overenthusiastic and often absent between scenes.
The sound effects were frequently too loud and director Hayley Joanne Bacon, whilst she had obviously worked hard on this production, had succumbed to what I call Brentwooditis.
This happens all too often with groups performing at Brentwood Theatre when each scene ends with a total blackout, followed by noisy and/or lengthy scene changing. Then at last the cast return, the lights go up while the cast has the task of building up the tensions again.
There's absolutely nothing wrong with changing scenery in full light. It helps to pass the time for the audience and maintains the energy previously built up by the cast. If this makes some directors uneasy, add some incidental music and choreograph the scene change and keep set dressing to a minimum.
As a theatre critic I always want the group I'm watching to do well. It's unfortunate and a sad reflection too, that by the second act, I even contemplated going to the "little girls' room" in the knowledge that, under Brentwood Theatre's new seating rules, I would not be allowed back in to the auditorium.