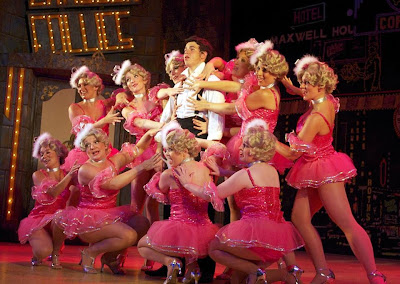 Cowboys, chorus girls and all those Gershwin tunes ! Who could ask for anything more … ?
Sallie Warrington's tremendous production for CAODS didn't miss a trick: the comedy, the glamour, the backstage clichés, all immaculately brought to life on our Civic stage, with Patrick Tucker's pitful of musicians adding extra gloss.
Two excellent players in the leading roles. Christie Hooper as Polly, born with vaudeville in her blood, and entrusted with many of the best numbers, including a superbly sung Someone To Watch Over Me. She's rescued from Nevada obscurity by Bobby Child, sent to repossess the Gaiety for his New York bank. He was played with a bouncy, puppyish enthusiasm by Young Gen veteran Henri de Lausun, who clearly has musical theatre in his genes, too, hoofing and delivering his duets with confidence and charisma. Their on-stage affair was a delight from the first coup-de-foudre, through the dewy-eyed dance-off to the lump-in-the-throat moment when he finally gets his girl before the Art Deco finale.
His mirror number with his impresario alter ego Bela Zangler [Kevin Richards] was neatly done, too. Another obscure song to emerge sparkling was Stiff Upper Lip, initiated by the Fodors [Angela Broad and Justin Oakley] and developed with imagination and style.
Among the many polished performances: Karen Kelleher as a svelte Irene, Jonathan Lloyd-Gane as the saloon owner, and John Cox as Moose.
But it's the ensembles that make the show, from the brain-dead drifters of Deadrock to the infectious tap-dancing energy of I Got Rhythm, with its tin trays and its pick-axe swings.

Email ThisBlogThis!Share to TwitterShare to FacebookShare to Pinterest
Labels: caods, Civic Theatre, CRAZY FOR YOU