WHO'S AFRAID OF VIRGINIA WOOLF ? 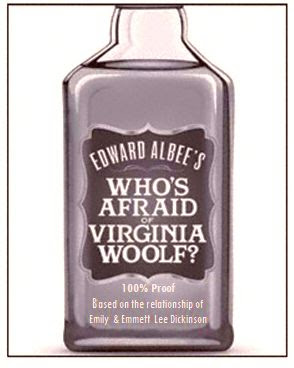 WHO'S AFRAID OF VIRGINIA WOOLF ?
Chelmsford Theatre Workshop at the Old Court
24.09.13


An evening with George and Martha is not a comfortable experience.
In fact the evening is past, and we're into the small hours. They return home after a faculty party, already the worse for wear, and are joined by a younger couple, a reluctant audience who watch, and drink, as game-play turns to total war, the dialogue punctuated by the clink of ice and the slam of glass on wood.
Edward Albee's play has lost none of its impact in the fifty years since it was written; Joe Kennedy's powerful production opts for a naturalistic, almost improvisatory style. We thereby risk losing some of the rhythms and structure of the dialogue. And some of the words, too, as the rows and the recriminations echo around the Old Court. But we gain an edgy, raw immediacy that forces us to stay up till almost dawn in the company of these four flawed individuals, through "Fun and Games", "Walpurgisnacht" and "The Exorcism", wondering what is true, what is lies.
This demanding piece needs accomplished actors, and the CTW's excellent quartet do not disappoint. Kelly McGibney, braying, bawling, baiting, gives a memorable Martha, vulnerable beneath the bravado, and lets us see the human being behind the wreck she has become. Her kimono monologue was superbly done. Well matched by Dave Hawkes as George, haunted by failure, trapped in a destructive relationship, but gamely battling on, sparring desperately with Martha. A promising CTW début from Rhiannon Regan as the dim, bubbly Honey, knocking back the brandy and trying to keep up. Jacob Burtenshaw seems slightly underpowered as her husband Nick, but this buttoned-up approach makes a good contrast with the emotional incontinence of the others; the moments when he does stand up to George's bullying are all the more telling, too.
We get the uncomfortable feeling that this couple may be destined to go the same sad way as George and Martha...
Amongst the many memorable scenes: George's monologue about the boy in the Gym, the pacey Get The Guests sequence, the strong end to Act II, and the sofa grouping at the start of Act III, which is echoed very effectively at the end of the play.


As George ironically remarks, a nice evening, all things considered.
on Wednesday, September 25, 2013

This was terrible. The pauses you describe was because the actors didn't know their lines and didn't understand the play. Poor effort. Get your "act" togethr ctw.