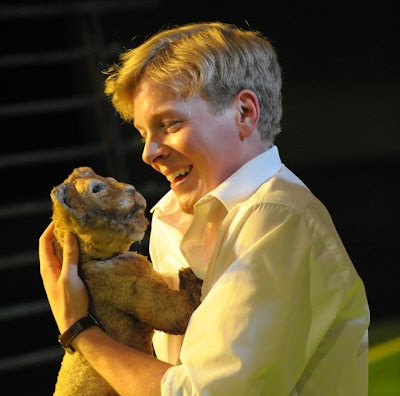 THE BUTTERFLY LION
at the Mercury Theatre, Colchester
30.08.13
for The Public Reviews

Will they mind the liberties I've taken, thinks the adapter/director. Will they change too much of the book, thinks the child in the audience.

No need to worry on either score. Michael Morpurgo's Butterfly Lion is a magical book; the story of a white lion, blue butterflies and two boys who run away from school.

Daniel Buckroyd's stage version captures all that magic, and more, and retains much of the text, too. One of the most heartening developments in British theatre over the past ten years is the realisation that the simplest ingredients can combine to make more of an impact than the most costly special effects. And this staging is economical, and inventive, and ingenious, with an evocative musical score by Carlton Edwards.

It all begins in Millie's kitchen, dust sheets and tea chests. Everything has at least a double life – one of the sheets becomes baby Bertie, the school walls are the lion gate, the fence round the farm in Africa.

The story is told clearly and compellingly. Lloyd Notice, who is the spirit of the lion, takes much of the narration, and is a helpful, sympathetic presence, as well as portraying a tree, a wall and a history teacher. His rich voice is perfectly suited to the mood of the tale, and his work with the sad-eyed adult lion puppet is enchanting. Gwen Taylor is an utterly believable Millie, whether as the mysterious old lady who treats the runaway Michael to tea, scones, and the story of Bertie and the Butterfly Lion, or the nurse in the Great War, or the ten-year-old girl whose kite brings her into contact with the other runaway, who once rescued a lion cub at the watering hole. The boys are both played by Adam Buchanan, which brilliantly points up the parallels in their stories. Fresh out of drama school, Buchanan gives an amazing performance, slipping in and out of narration, equally convincing as the small boy and the V.C. hero. Gina Isaac, no stranger to this house, is the mother torn between duty to her husband and sympathy for her son.

But this is very much an ensemble piece, studded with memorable cameos. Michael Palmer as several not very likeable authority figures, including Bertie's father, Sydney K Smith as Merlot the circus man, Christopher Hogben as the French café owner. Not to mention the menacing hyenas, and the beautiful butterflies, all individually crafted in the Mercury's own workshops. This amazing company really make us believe they're off to Africa, and bring the watering hole to life with model animals and a blue tablecloth. The set is simple, the kitchen stove a constant presence; the slopes of the veldt become Vimy ridge at the start of Act Two, a simple suggestion of a ship's voyage turns instantly into an arrival. The lion puppets, directed by Sue Pycroft, seem often to have a life, and a soul, of their own.

The ending, when reality and imagination, life and death, writer and character all seem to merge, is wonderfully uplifting, the stage filled with Adonis Blue butterflies, flocking to settle on the chalk lion on the Wiltshire hillside.