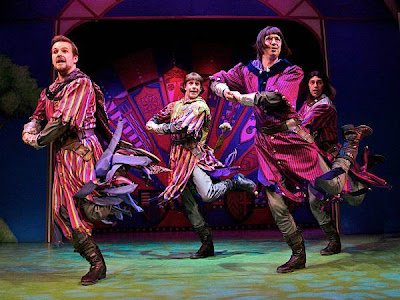 It's a long time since Monty Python was cutting-edge, envelope-pushing entertainment.
Eric Idle's tribute show – "lovingly ripped off" from the television and the films – is a bright and breezy mock-musical, which does its best to please everyone with an anarchic mix of pantomime, pastiche, and slapstick. Shopping opportunities, too, with the La Vache tee-shirt and the Grail Ale top of my list. 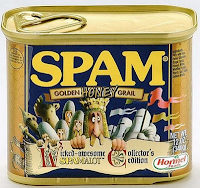 So who was in the packed Playhouse ? A prep school outing, in uniform, plus the usual foreign tourists, theatre/meal deals, and the fans, who couldn't wait for the singalong at the end.
Against a brightly coloured set, variously referencing Las Vegas and Les Tres Riches Heures, Christopher Luscombe's energetic, gloriously silly production has verbal sparring – the riff on the coconuts an early example – in-jokes in passing [plumage, suspenders and a bra], two hard-working showgirls and some rather good songs [MD Gareth Weedon]. Not just Always Look On The Bright Side, without of course its crucial irony, but a witty, knowing Star, much changed since the Broadway opening, and excellently delivered by Rob Delaney's Sir Robin, Not Yet Dead, I'm All Alone, with the whole company plus SM and ASM pressed into service in support, and some clever kitsch for the Lady of the Lake, gamely belted out by the unsinkable Bonnie Langford, whose stage presence and sense of fun are a great asset to the company.
Robin Armstrong is a likeable, blokish Arthur King, and Adam Ellis comes into his own in Act Two as Prince Herbert, with much coming-out campery as he finds his true love in Kit Orton's Sir Lancelot. Michael Burgen outstanding as Patsy, the Baldrick/Lucky sidekick to the King, with his coconut shells and his outsize backpack. Plus turns from James Nelson as widowed Mrs Galahad, from "Boris Johnson" and, of course, in full armour, Sir Not Appearing.
Joe Pasquale takes over as Arthur on June 17. It will be interesting to see how his unique performance style suits the part originally created by another shrinking violet, Tim Curry …