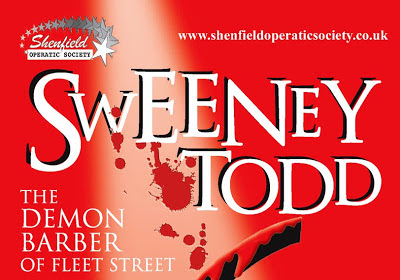 Even by Sondheim standards, this is a challenging piece for any company, amateur or otherwise. Often operatic in its style and in the demands it makes on its singers, especially the chorus.
Louise Hunt's excellent ensemble responded magnificently, boldly navigating the reefs and rapids of the score, and always visually effective, whether as masked revellers, lunatics, bathing belles, black-backed gulls or assorted Londoners. I liked the Pirelli bounce, but standing and delivering diagonally worked well, too, as did the backward glance on the Fleet Street exit.
The show opened with pools of red [not much actual gore in this version] and a London Peculiar, as a couple of coppers start the familiar narrative.
Two principals in particular manage the tricky double of music and melodrama: Kerry Cooke is a magnificent corseted Mrs Lovett, and Louise Byrne excels in the smaller, but crucial, role of the mysterious Beggar Woman. Ian Southgate, too, was a confident Anthony, deftly delivering solos, duets and those tricky quartets, as he strives to rescue his Johanna [Lauren Ramshaw] from the clutches of the creepy Turpin [Hugh Godfrey]. Less assured vocally, but a strong dramatic presence, was David Pridige as the dark-eyed, brooding Benjamin Barker [aka Todd], driven by his desire for vengeance. Strong support from David Ward's Beadle – excellently sung and impressively acted – from Joanna Hunt as Tobias and Rick McGeough as the devious mountebank Pirelli.
The small space was very effectively used, from the dumb-show back-story to the quick and the dead returning for the final chorus. A four-sided truck – complete with antique chair and chute – was a versatile stage, even becoming the end of the pier for the By The Sea idyll.
The unseen orchestra was directed from the keyboard by Adrian Ure, who did an excellent job of bringing Sondheim's ballads, songs and snatches to life.
on Sunday, June 16, 2013