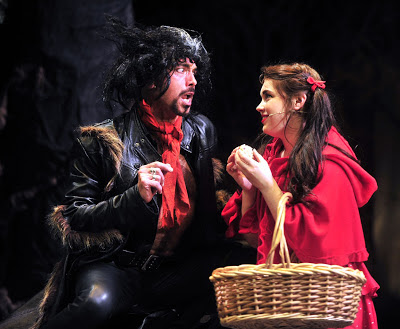 INTO THE WOODS
Gallery Players
at the New Wolsey Theatre, Ipswich
29.06.13
for Sardines Magazine

Tea and flapjack in the interval. "… like going back to your childhood, only deeper and darker …" muses the man at the next table. Can't think of a better summing up of Sondheim's Into The Woods.
Often considered a difficult piece, though popular with performers, there was something of a breakthrough in Regent's Park the other summer, when Timothy Sheader had the narrator, usually an older, wiser, character [Nicholas Parsons in the West End back in the Dark Ages], played by a small boy, taking refuge in the woods, with his dolls and his demons. So I was delighted to see Steve Wooldridge borrowing this idea, and extending it in a devised prologue with the child's little friends, playing games in the scary fairy-tale forest – what's the time, Mr Wolf …
Tom Beattie is brilliant as the boy, confidently drawing us into the action, singing along, acting out key confrontations with the aid of the plastic dolls.
But there's not one performer less than excellent in this polished show – it has a very professional feel about it, and not simply because of the Wolsey stage with its technical facilities.
Particularly impressive were Stephanie Brown as the determined, practical mother of The Lad Jack – engagingly done by Jack Brett. Molly Scurrell was Red Riding Hood, a strong character, howling like a toddler, outstanding in her loss-of-innocence number "I Know Things Now". The tormented Baker, ultimately Tom's dad in this version, was compellingly sung and played by Paul Stone – Clare Dungey was almost unbearably moving as his wife, longing for a child; her "Moments in the Wood" was one of many musical high spots. The feisty Cinderella, duetting effectively with Dungey, was Rachel Lucock. The Jedwardian princes, Tom Mayhew and Joe Leat, ridiculously posh with their lace and their fowling pieces, made the most of "Agony". And rising to the challenge of the complex Witch, Shelley Clempson, a memorable incarnation on rustic crutches, giving us a splendid Last Midnight, enhanced by strikingly atmospheric lighting [Dan Scarlett].
The whole ensemble was incredibly secure; I shall long remember the tableau at the end of Act One, with all these Grimm characters looking down on poor Tom in his lonely sleeping bag.
A constantly delightful use of detail – the post-coital cigarette, the tea-cosy hat, the leaves falling from the rafters, the washing line, "Essex Way" [home of Cinderella's TOWIE step-family], the foliage birds, the Baker's Wife's corpse trolleyed off, the bullies finally turned into piglets, not-so-little Red Riding Hood constantly stuffing her face with cakes. And the wonderful Milky White, an expressive bovine puppet, created by Dave Borthwick, who also designed the stylish woodland set.
The music was directed by Richard Healey, with his classy band high up stage left, next to the Witch's leafy lair.
on Sunday, June 30, 2013