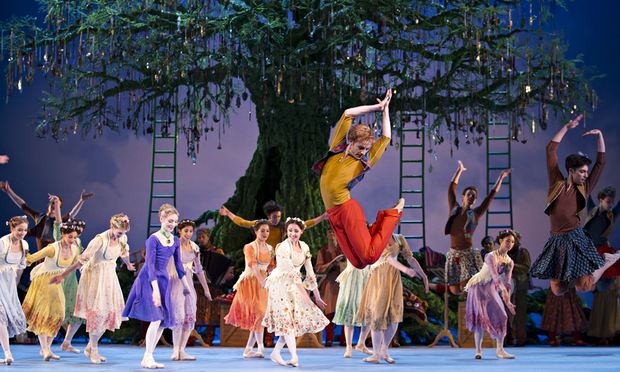 
The many thousands who enjoyed Joby Talbot's Alice in Wonderland score will instantly recognise the musical idiom here. Accessible, heavy on tuned percussion, but, understandably,  less jolly and more obviously minimalist than in the earlier piece. The huge forces are conducted by David Briskin.

This ambitious narrative ballet reunites that Alice team to excellent effect.
Bob Crowley's design includes monumental columns, and the shadows they cast, landscape paintings as backdrops, and, in Act Two, a wonderful tree, dripping with golden ornaments, where we discover Florizel languishing faun-like in its roots. There is projection, too, with ships and storms, and a bear on a billowing silken sheet. A gangplank, a tall narrow staircase, which Mamilius [nimbly danced by Joe Parker] and his teddybear descend as he watches his mother's beautifully crafted solo. There are lifelike statues, too, preparing us for the climax, in which, movingly, Leontes, overjoyed by Hermione's awakening, reaches out to the figure of the boy Mamilius, forlornly hoping for a further miracle ...
Christopher Wheeldon's choreography is eloquent and often poignant – Sarah Lamb's Perdita is given some lovely flowing movements. And the [?over-] extended rustic dances in Bohemia are most enjoyable, pastoral but not pastel – the autumn colours have a Balkan feel. And the narrative arc is clearly and simply delineated.

It's not a simple task to deliver the poetry of Shakespeare's original in dance form. Edward Watson's Leontes, tortured by jealous doubts, is an impressively expressive performance, and Lauren Cuthbertson's Hermione is touching and physically convincing. Steven McRae is typically athletic and outgoing as young Florizel, but with some touching moments with Perdita. And Zenaida Yenowsky is a marvellous Paulina, a strong pivotal figure in the story's unfolding.