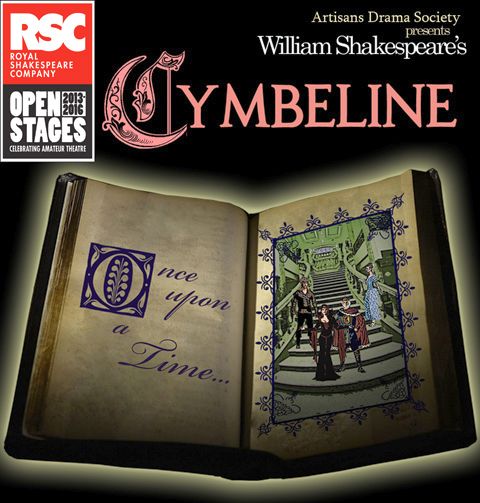 Mary Redman was in the audience ...

Artisans' Designer and Director Nicola Stacey has a long and distinguished record of re-imagining classic plays such as this rarely produced or academically studied late Shakespearean romance, Cymbeline.
Yet once again audiences were not disappointed with her comic silent film, highly melodramatic approach. Even if, in the interval, many of them were studying foyer cast photographs to try and work out who was who and which gender they were. An apparent shortage of male actors led to some confusing casting but all was well that ended well since there was no deficiency of comedy and laughs.
Despite a three-page,small-print summary of the plot in the programme it was easy to get led up a garden path (probably ending in the renowned yet rather unlikely Shakespearean romantic trysting place of Milford Haven).
The basic story is Snow White complete with wicked stepmother and her camp son, plus a vanished royal daughter combined with the misadventures of lost or banished sons of the king. Basically Shakespeare was doing a John Godber or Ray Cooney by reusing and churning up previous successful plays.
The prequel to the play was done as a silent film to fill in the background to the play. Plus all through the production MD Darren Matthews gave us a marvellous piano solo accompaniment to match the action.
Barry Howlett looked sufficiently regal as a King Cymbeline rather more than somewhat prone to displays of temper. His gleefully wicked Queen played by Shealagh White with great relish and beautiful clarity of speech. (She later reappeared very successfully as an extremely Welsh Soothsayer). Almost glued to his mother's side when he wasn't attempting rather unsuccessfully to be a naughty villain, was Gary Catlin's hilariously camp and OTT son Cloten.
The lovers in the shape of Neil Gray's not-what-you-would-expect-from-a-hero Posthumus partnered by Romy Brooks the delightfully lively, lovely young thing as Imogen. Together or apart they went through numerous trials and tribulations to get their morganatic marriage recognised.
The faithful servant Pisanio was played strongly by a dragged-up Emily Catlin complete with false moustache and beard matched in stage masculinity by Wendi Sheard's brave Roman Captain. Tim Tilbury was an extremely nasty villain Iachimo who got booed by the audience and his just deserts in the end.
There was a very strong supporting cast and things looked very good thanks to Chris Wilkes's lighting and the director's choice to go for minimalist staging. This made choreographed use of the human arch “supports” and a grey flannel “cave” responding to people going in and out.


The colourful costumes were extremely effective. Apparently it took Nicola hours on the internet gathering them all together, the only thing lacking being corsets. One of the many wonders of this show was the hilariously choreographed stroboscopic battle between locals and invading Romans.
on Tuesday, April 29, 2014