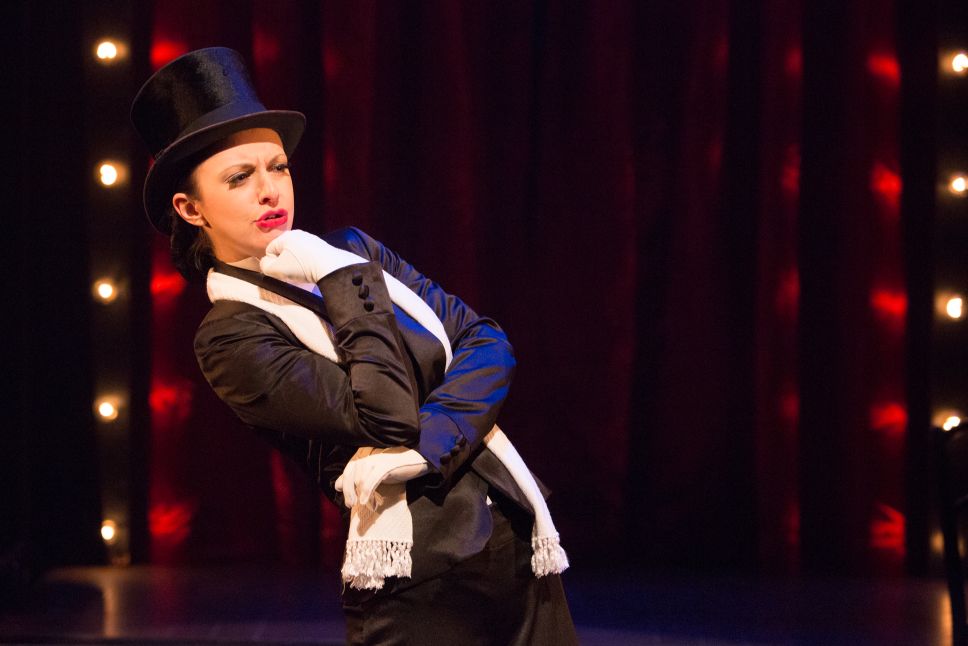 A nurse from the North Country longs to be on the burlesque stage. Her ambition is fostered by three men in wartime London – a black-marketeer Mr Fixit, a war-hero toff and a Polish Jew in exile.

Matthew Bugg's labour of love began its life here in Ipswich last year. Now, after a national tour, substantial rewrites and cast changes it's back at the Wolsey before taking to the road once more.

The setting for this intimate tale is simple but evocative – footlights, a bed and a baby grand , with the tiny stage of The Night Light at the back. One of the many members' clubs, deep underground in the dark, which kept Londoners entertained through the Blitz; “We Aim To Tease” its motto. Clandestine meetings in the blackout for The Enemy Within – homosexuals at risk of blackmail or jail.

These worlds are powerfully evoked in the opening minutes. One of the many strengths of this piece is the bond between the musical numbers and the messy lives of those involved. It helps, of course, that the company of six are all actor-musicians. So the emotional ties between Miss Nightingale herself and her composer/pianist and her impresario are repeatedly represented by their saxes and her muted trumpet. Art mirrors life on this cabaret stage - “I Don't Care” - and, most effectively, the Bluebird song, expressing her distress at the loss of her soldier brother Harry. And it's Harry at the piano, played by Bugg himself. A heart-stopping moment.

The casting is very strong. Harry Waller is outstanding as George, the refugee who longs to bring a little bit of his [1930s] Berlin over here to Blighty, torn between his singer and his lover. Jill Cardo is the forces sweetheart – more Gracie than Vera – who puts over the numbers with style and heart. Her invocation of Noel Coward, gorgeously dressed, one of many highlights of the burlesque act; the fallen Blue Angel, the sausage-starved housewife, the riveter ...

Tobias Oliver is an uncomplaining dogsbody. Tomm Coles is Sir Frank, who seeks Maggie's hand in a lavender marriage, and Adam Langstaff is her amoral first love, Tom, who threatens to ruin everything by blackmailing Frank over his affair with George.

Despite the tightening and the rewrites, there is still a good deal of expositional dialogue, with the themes and the history sometimes getting in the way of the characters. And one confrontation seems to be conducted entirely in clichés – it's never a good sign when you can anticipate the rejoinders before they're spoken.

But the music more than compensates for any dramatic shortcomings. Traditional love songs - “Mister Nightingale” - the clever trio “Could It Be”, the key changes in “Someone Else's Song”, the feel-good flash-forward ENSA finale, and, best of all, the a cappella tap-dancing “Stand Up And Be Counted”. This, of course, is pure pastiche, and these ersatz saucy wartime hits are superbly done, from the double-entendre come-on of “Let Me Play On Your Pipe” to the priceless “Sausage Song”.

Miss Nightingale is a touching, thought-provoking reminder of a lost world: light entertainment and illicit love in those dark days of the 1940s.