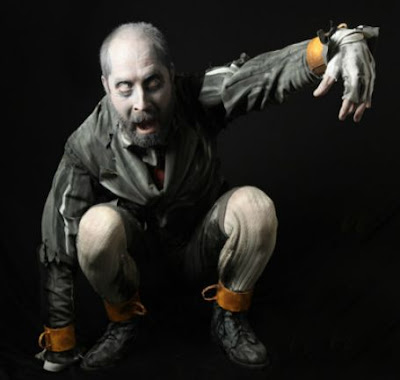 Painfully emerging from the Chasms of the Netherworld after 175 years, Jacob Marley, Scrooge's late partner. Like Hamlet's father, he is condemned to be a ghostly bit-part in literature.
But now, in James Hyland's chilling theatrical tour-de-force, he is centre stage, putting his own spin on the familiar Christmas tale.
Dusty and decaying, laden with chains and money-bags, with just a wooden chair for company, he brings to life Charles Dickens' colourful characters. With a turn and a shrug, he becomes Fred the nephew, Bob the Clerk, Belle the beloved, the bereaved Cratchits, the portly Gentleman and even Tiny Tim. And of course Scrooge – his penny-pinching profile, his gleeful enlightenment, and, for a macabre moment, his deathbed corpse.
The author's intentions were well served, one of two interpolations aside [Fat Harry the poulterer?], and it was appropriate that this version concentrated on spectres and redemption. The three apparitions were wonderfully done – the dwarfish past, the towering present, the future with his clawed hand.
No second chance for Marley, alas, and he staggers off to the "incessant torture of remorse". But not before he's rejoiced in Scrooge's new-found generosity of spirit, and wished us all a Merry Christmas.
photo: Hayden Phoenix


A Christmas Carol - As told by Jacob Marley (deceased) from James Hyland on Vimeo.
on Thursday, December 29, 2011