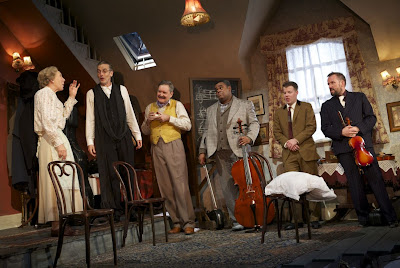 
at the Gielgud Theatre, Shaftesbury Avenue

Fans of the '55 film – and they are legion – have nothing to fear.
This is not a spoof – think 39 Steps – nor is it a "remake", like the Coens ill-judged Hollywood version.

What we get is an affectionate, respectful treatment of the screenplay, with a little bit of edge and a few nuggets of comedy gold for the 21st Century. Even the music [Ben and Max Ringham] pays homage to the original.

Three elements in particular make Sean Foley's production, down here at the Gielgud after a successful run in Liverpool, one of the best things in town. The script, by Graham [Black Books] Linehan keeps much of the dialogue, but sifts and adds, tightening the pace and bringing almost all of the action indoors.
The set – Michael Taylor - is a marvellous crooked house, on several levels, none of them horizontal, with a staircase spiralling off into the flies. Its impressive revolve also hosts the Heist – birds-eye view – and the Copenhagen tunnel. In one show-stopping set-piece, a passing train sets in motion a crazy ballet of furniture and fittings. And the cast is faultless, from the bizarre Little Britain gaggle of lady visitors to the little old landlady – Marcia Warren, who's much in demand for this kind of role – and her lodger, the sinister Professor Marcus [a brilliant Peter Capaldi].
His gang of five – the string quintet – includes James Fleet as the Major, a shifty conman now also a cross-dresser, eagerly eyeing Mrs W's lilac gown, Clive Rowe as a slow-witted ex-boxer, Ben Miller as the idiomatically challenged Romanian, and Stephen Wight as Harry – popping pills and on the sharp end of much of the slapstick.

There is satire [Bankers!] and wit - "Being fooled by art is one of the primary pleasures afforded the middle class" – with plenty of farce [the blackboard, the meeting in the poky cupboard] and running gags. And those fans will welcome the Boccherini, and Marcus's endless scarf ...

Email ThisBlogThis!Share to TwitterShare to FacebookShare to Pinterest
Labels: Gielgud Theatre, The Ladykillers