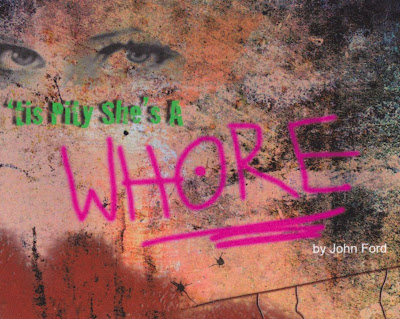 TIS PITY SHE'S A WHORE
Kytes Theatre Group at Brentwood Theatre
05.11.10
Ford's Cockpit play of 1633 has all the hallmarks of a Revenge Tragedy, not forgetting the bloodbath finale. Notoriously, it portrays a man destroyed by [mutual] love for his sister. Alan Ablewhite's impressive production was all the more powerful for being in modern dress.
The text was trimmed and tweaked for the modern audience too, and we were left with a very strong piece of theatre that retains all of its power to shock.
Excellent use was made of an upper level, for the king-size incestuous sheets, and I liked the screen and the red walls and carpet.
Lionel Bishop was Giovanni – My Fate Is My God – and he gave a subtle, layered performance, with superb soliloquies. His Annabella was Hayley Joanne Bacon, especially impressive in the long scene at the start of the second part, where she is bullied by Soranzo, her husband, convincingly played by Paul Sparrowham.
The servants were particularly well characterized here. Vernon-Keeble-Watson's Vasques took a while to convince, but never looked back after his scene wheedling the truth from Putana, a feisty Helen Elsworth, enjoying girly giggles with her mistress. Scheming Hippolita, wicked fairy at the wedding feast, has the best death scene; she was magnificently done by Julia Stallard. James Hannant was an improbable priest, but came into his own when he warned of the hellfire to come.
When death's shadow has passed, only the Nuncio is left to bury the dead – instant gravitas from Brian Terry to end a stunning two hours' tragedy.
on Saturday, November 06, 2010