THE MEMORY OF WATER 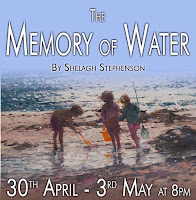 Shelagh Stephenson's first play has three sisters gathering in the family home on the eve of their mother's funeral. There is little love lost between them. They bicker, swig whisky, share recriminations and the odd reefer.

In Joe Kennedy's emotional production, the laughs and the depths were given equal weight, though I felt that a more oppressive set might have helped to situate these characters more securely. The ending was very moving, and the drug-fuelled dressing-up which ends Act One was equally effective.

Emma Moriaty was very touching as the doctor who must learn to love the cold, Caroline Wright was entirely believable as the sulky, garrulous youngster, vulnerable and insecure. Domineering Teresa was stylishly played by Lorraine Ely, increasingly unsteady on her feet as her life, too, unravels before our eyes.

Alan Ireland was the good-natured Frank, and Roger Saddington did a good job with the sketchily-written TV doctor, timing his laughs and delivering the water memory nonsense with real feeling.

Their late mother, remembering toffees from Torquay and watching the encroaching sea, was Jean Speller, who brought out the poetry of the part. She was especially moving as she tried to explain what Alzheimer's is like from the inside.

The opening night performance was secure and confident, despite a well-aimed jar of cold cream, and a front row with two critics, a chap in shorts who was helpless with laughter, and two elderly ladies who kept up an all-too-audible commentary on the show. As they said, “a weird story”.