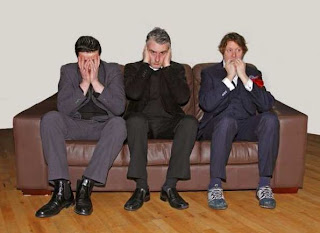 An unlikely hit, Yasmina Reza's drama depends a lot on the casting, which in the West End was regularly changed to bring in new guest stars. The original actors were Albert Finney, Tom Courtenay and Ken Stott.

The problem I have with it is that it is so very French. Three thirty-something men, discussing not football or popular culture, but philosophy, poetry and fine art. The play is about relationships, but "art" [the quotes are part of the title] is the catalyst, the keystone of the conflict.

CTW's trio – chamber music is not a bad analogy for the style here – was a tad blokish, given the intellectual weight of the dialogue. Body language, mangled French, Christopher Hampton's coarse translation, none of it helped us believe what we were hearing.

But the performances were otherwise excellent, and Christine Davidson's production had some wonderful ideas: the diary-room asides to the audience, the three wise monkeys, the three taps to the chest immediately echoed by three knocks on the door [any French actor would recognise les trois coups], the sequence with the olives – all great theatre. The pace was varied and the actors sparked off each other with practised assurance.

Stuart Moore was Serge, an unlikely dermatologist [feet resolutely apart, arms too far from the body] and proud owner of the 200,000 Franc canvas. Jeremy Battersby got closest to the spirit of the piece with his cynical, slightly crumpled, slightly camp Marc, brilliant when he was trying to be on his best behaviour, and very effectivel in the nicely judged final moments. Caught in the middle [nicely reflected in the sofa grouping at one point] was Dean Hempstead as Yvan, the referee and reconciler, who shone in his virtuoso phone call with his mother.

The suitably monastic set was by Robin Winder, and the assistant director was Lynne Foster.