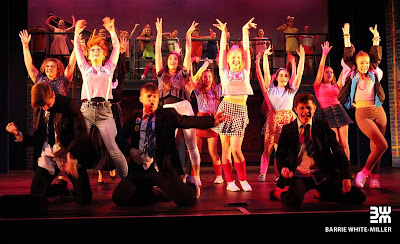 OUR HOUSE
Chelmsford Young Generation at the Civic Theatre
08.11.17

A typically exuberant performance by Young Gen of this iconic Madness morality musical.
Director Sallie Warrington opts for a simple staging – twin triangular trucking towers, an upper level for the juniors,  black and white curtained doorways for the “simple equation” - and fills the stage with boisterous, streetwise, cheeky kids. Excellent ensemble work, not only with the famous dancing desks, but Camden Market, the faceless prison inmates, the Wings of a Dove production number, and much more. Though the opening of the second act feels very static by comparison.

A splendid crop of principals, headed by Charlie Toland as “Golden Boy” Joe Casey, whose Sliding Doors moment triggers the seven-year alternative lives of Good and Bad. His loyal girl Sarah the lawyer is wonderfully sung by Jessie Hadley, with exemplary diction – not the case for everyone on stage, meaning that Our House newbies might struggle with the finer points of the plot.
Great comedy support from Millie Parsons and Livi Khattar as the two girls turning up like bad pennies, and from Matt Wickham and red-shoed, magnetic Reuben Beard as the “gormless prats”.
Dan Hall is determined to shine in a quartet of cameo roles, and Oliver Gardner manages three other characters in addition to the property developer Pressman. The evil Reecey is played with a palpably malign presence by Jack Toland.
The grown-ups are Jill Gordon, a movingly subtle performance as Mrs Casey, and Assistant Director Jimmy Hooper outstanding as the ghost of Joe’s father, desperately trying to help his boy avoid the mistakes he made in his own life.
Those catchy Madness tunes are given great support by Bryan Cass’s punchy pit band, featuring Rob Downing’s soaring saxophone.