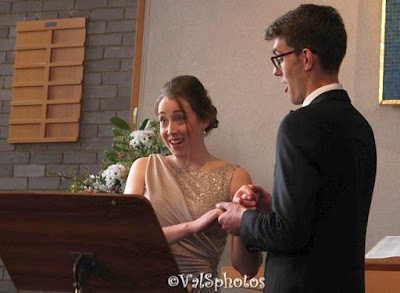 Aptly titled Primavera, Kayleigh McEvoy's springtime recital programme was an enjoyable collection of all kinds of song.
Kayleigh, in the final year of her BMus at Guildhall, is no stranger to Trinity and the Chelmsford stage. She has a rich, remarkably mature voice, heard to great effect in Dvorak [in the original Czech] and Quilter, amongst many others. She is an engaging performer, with flirting opportunities here in Satie's Diva, and dramatic petulance in Dove's Enchanted Pig – tiara-related wedding-day tantrums – and Schubert's Die Manner sind mechant.
She was joined by two excellent fellow-students. She duetted delightfully with baritone Adam Maxey in Don Giovanni – his seductive “Andiam” her downfall – and with Matthew Hamilton Healy as her Bocelli in that crossover favourite La Preghiera.
The young men shone in solos, too – Adam in Britten's tale tall of The Crocodile, and Matthew in Cole Porter's camp fable of The Oyster.
At the piano throughout – coping splendidly with the tricky Britten and the lovely Schubert – was Joseph Cummings.
The introductions were done with the lightest of touches, brief and to the point. And the three singers joined, as we hoped they would, in an encore, I Bought Me A Cat, from Copland's Old American Songs.