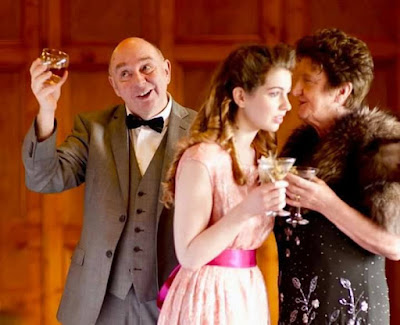 Harvey first “appeared” on Broadway a lifetime ago, but this pooka pal has remained popular ever since, due in part to the Jimmy Stewart movie.
Now he's haunting the Old Court stage, in a gently amusing production by Jade Flack.
Elwood P Dowd, “the biggest screwball in town” and the rabbit's constant companion, is given a warmly absorbing performance by Dave Hawkes, perfectly capturing the sunny innocence of this harmless eccentric. Strong in support are Lynne Foster as his desperate sister, with some great moments of physical comedy, and Alec Clements as Sanderson, the callow, charismatic junior doctor at the sanatorium run by Dr Chumley [Jesse Powis in a memorable bow tie].
Not all the performances are quite as assured as Hawkes', but there are nice cameos from Stephanie Yorke-Edwards as Mrs Chumley, Fabienne Hanley as Aunt Ethel, and Ian Russell as the all-important cab driver.
Not many laughs on a thin Friday night, despite the sterling efforts of some experienced performers, but some excellent work in key scenes; Sanderson getting advice from Dowd, or left alone on stage with Ruth [Jade Flack].
And the scene changes from The Dowd Library to Chumley's Rest are very efficiently managed.
on Saturday, April 08, 2017

An excellent performance by a mix of experienced actors and some that are entering into the world of acting. The 'newbies' more than hold their own in this play which is competently directed by Jade Flack who also plays Nurse Kelly. Lines are delivered well and there are some classic life messages e.g. when the taxi driver explains the effect of the medication about to be given to Elwood so he no longer sees Harvey "... and afterwards he will be just like a normal human and you know what bastards they can be." This is subtle and clever humour mixed with poignant observations of human behaviour. Well worth seeing.