PIRATES OF THE PANTO 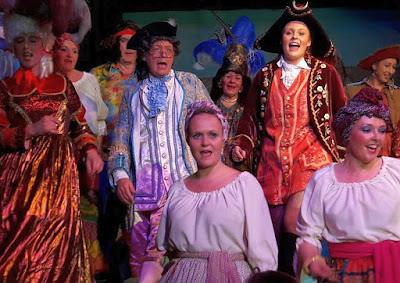 
A winning blend of originality and tradition for this year's Little Waltham village panto. Not so many local jokes, but still that warm, confident interplay with the supportive, up-for-it audience.
Festive favourite Richard Butler brought his trademark anarchy to the role of Squire Flinders, heading an excellent comic team which included Ken Little's dim Bobby and Gordon MacSween's lovely Scottish Dame, a wicked glint in his eye, sporting a wonderful wardrobe of fancy frocks.
Good supporting work from a double helping of duos: feeble seamen Poop and Deck [Hugh Godfrey and Julie Cole] and Skull and Bones [Kathy Jiggins and Verity Southwell], sidekicks to Ash Cobden's dashing villain Captain Spongebag Roundpants. Plus cameos from Jenni Money as Harry the Harbour Master, Brian Corrie as Honest [“no tic”] John and Martin Final as Bosun Rollicks [Rowlocks?] with his knobbly cosh.
Love interest from principal boy Zac Sparrow – a swashbuckling, thigh-slapping Tash Wootton – and Rebekah Walker's demure Moll Flinders. Karen Allen's Queen and Marea Irving's Priestess led the denizens of Discomania Island.
This being Little Waltham, there was a generous supply of disco routines from the hard-working chorus, impressively choreographed by Sue Butler and Karen Allen. A lovely undersea scene change, too, with bubbles and giant jellyfish. MD Karen Wray treated us to an eclectic play list: Barbados, Montego Bay, Otis Redding, Nelly Furtado, Michael Buble, Avenue Q, not to mention Prokofiev for the evil pirate.
And of course we had the walkabout with the sweetie baskets, a custard pie, and a nice hairy-bottomed ghost routine.
Liz Jones's backdrops included an impressive perspective for the Slack Jenny's deck;  the stage-side murals this year featured Jolly Roger, gull and parrot.

Pirates of the Panto was directed by Jenny Broadway, who last worked with Karen Wray on the 2012 Abba Ali Baba.
on Wednesday, January 18, 2017