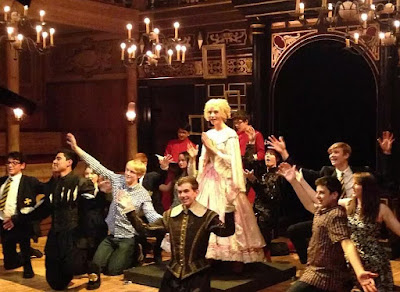 
Ford's final dramatic work was performed in 1638 at the Cockpit Theatre.
For years, scholars have struggled to imagine what that performance might have been like. Their imaginations will be hugely helped by this revival, by the boys of Shakespeare's old school in Stratford, in the candle-lit space of the Sam Wanamaker, a theatre very similar to the Cockpit off Drury Lane.
Perry Mills gets remarkably mature performances from his young actors. Finlay Hatch is a confident Auria, the Genoese nobleman whose departure to fight the Turkish foe sets the complex plots in motion. His friend, the faithful Aurelio, is James Williams. Little Adurni [Pascal Vogiaridis], tempted to seduce Auria's abandoned Spinella, is perhaps the most clearly spoken; Dominic Howden makes a pleasingly fey Futelli, while Dan Power and George Ellingham wring every ounce out of the comedy Spaniard and Dutchman, suitors to the lisping Amoretta [Ben Clarke].
It's the “girls” who have the toughest job, of course. And provide the most fascinating insight into how Elizabethan, Jacobean – and here Caroline – playwrights may have seen their female characters come to life. An amazingly talented cohort here: Joe Pocknell's poised Spinella, Charlie Waters as her kid sister Castanna, and an incredibly accomplished Levidolce from Jack Hawkins.
The production, though necessarily simple and uncluttered, does have some inspired moments – the picture-frame prison, the glee, and the heart-stopping fermata before the weddings and the epilogue.
Epilogue and prologue both mix 21st century and period costume [not to mention school uniform], and the present day, in the shape of students seated on the stage, is intriguingly woven into the action.


A rare chance to see this Ford – rarer still to see it in something approaching the form it would have taken when acted by “both their Majesties' servants at the private house in Drury Lane” ...

Forget not Pierro kind sir. A small part, perhaps, but whatever your judgement, should not be forgotten as it were.