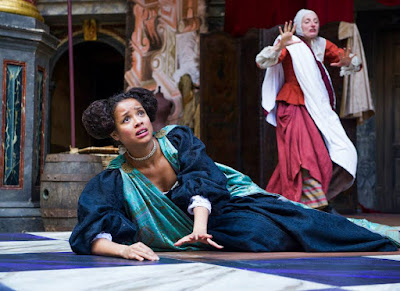 At the end of a long and varied season, an end-of-term treat: a crowd-pleasing love-song to the playhouse.
Eleanor Gwynn, as every schoolboy used to know, sold oranges to the punters before being talent-spotted, first by the management, then by the monarch.
Jessica Swale's play sticks closely to the biography, apart from the upbeat ending. Christopher Luscombe brings a joyous exuberance to the story. Nell the performer is the focus here, one of the first women to appear on the Restoration stage. She's played with bright-eyed effervescence by Gugu Mbatha-Raw. Leading man Charles Hart [Jay Taylor] coaches her, David Sturzaker's Charles II is smitten.
There is a whole host of supporting characters, all delightfully larger than life. Sarah Woodward gets two of them – a hysterical Queen Catherine and Nell's drunken madam of a mother, puffing on her pipe and pinching a pint from the groundlings. Graham Butler is John Dryden, Greg Haiste is superb as the affronted Kynaston – one of the last surviving lady boys of the English theatre, the star of Stage Beauty. And Amanda Lawrence steals all her scenes as Nan, the dresser. Coaxed onto the boards, she keeps us in stitches as she misses her entrances, and stands rooted on her exit, pursued at this final performance, by a stray pigeon.
The scene is set backstage, with fly-lines and weights, a few scene flats and a suggestion of a dressing room stage right. The musicians' gallery is transformed into King Charles's royal box. The structure harks back to the Restoration, with Angus Imrie making a mess of the prologue. And, yes, there's a real spaniel, too.
A joy to watch, and a heart-warming story with plenty of proto-feminist jests and jibes. One of the Globe's best offering this season, it began last year back at LAMDA, and surely deserves a longer life.