FARINELLI AND THE KING 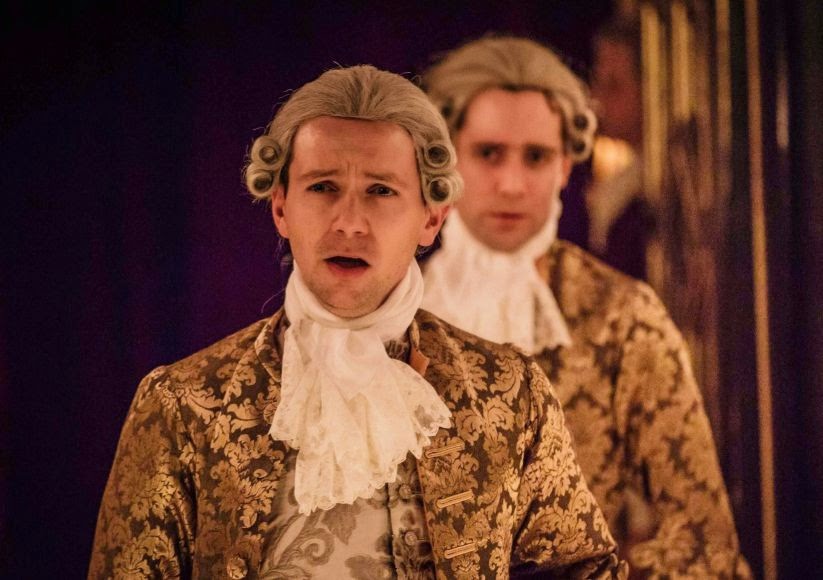 FARINELLI AND THE KING


We meet the King first. He's Philip V of Spain, grandson of Louis Quatorze and embroiled in war.
Mark Rylance brilliantly suggests the delusional dreamer, prey to depression and sudden rages. He's alone on his divan bed, save for the goldfish in the bowl; a companion as well as a quarry …

The ailing king is stranded “at the end of the world”, in a place with no song. He seems beyond help. Metastasio, prolific librettist and business-man – a bluff Colin Hurley – despairs. Devious minister De la Cuadra [Edward Peel] plots and fumes. His physician – Huss Garbiya – is sympathetic and enlightened, but powerless to effect a cure.
It's left to Isabella Farnese – a wonderfully caring Melody Grove - to realise that the singer she heard in London - “ a long note, held ...” might hold the key to recovery.
And so the two men, both kings against their will, meet in a wary game of question and answer. “Are you famous ?” “Farinelli is famous.” And here is the key to the depiction of the superstar castrato. There's Carlo the man, [Sam Crane] unfailingly charming and courteous, modest despite his fame. And the world-famous opera singer, mobbed and cossetted wherever he goes. Sung, superbly, by Iestyn Davies [William Purefoy later in the run]. They appear together at key moments, the one the shadow of the other; at the end there is a touching moment of mutual acknowledgement, after Farinelli has been persuaded by Vincenzo, a humble tailor [no spoiler, please], to sing one last time – what else but “Lascia ch'io pianga”.
Monarch and musician can lay aside their crowns, escape into the forest and the music of the spheres.
Claire van Kampen's play is a potent blend of reminiscence – Farinelli's first opera, the fountains at Versailles – escapist fantasy – A Watteau woodland backdrop – and total theatre: the Wanamaker audience involved as witnesses of the freak show opera in the forest.


It's a bizarre story, surreal and slightly bonkers. All the more powerful for being, by and large, true to history. It is beautifully told here: the space is ideal for the drama and for the music [Handel and Porpora, impeccably performed, with Robert Howarth directing from the harpischord], and the creative team assembled in the Sam Wanamaker Playhouse is the stuff of dreams. As witness the enthusiastic reception given to the production on opening night – warm and vociferous even by Globe standards.