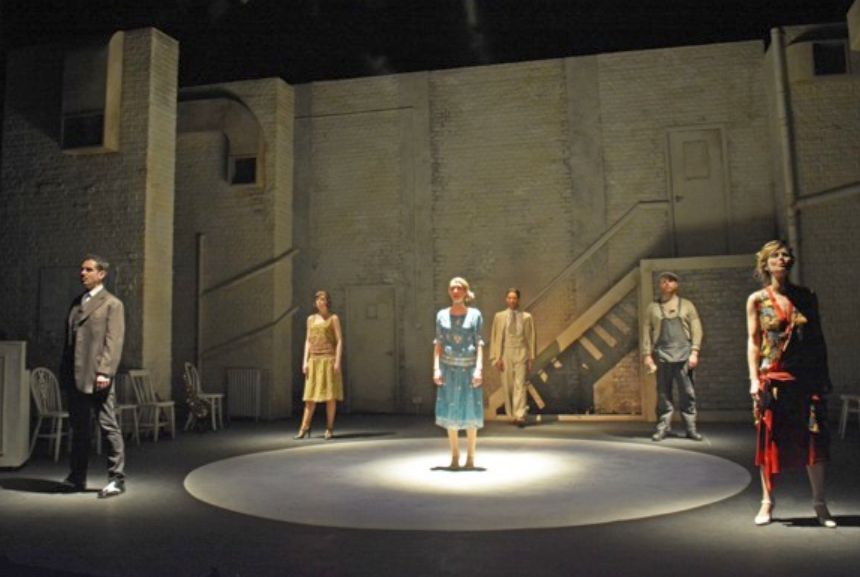 THE GREAT GATSBY
Cut to the Chase at the Queen's Theatre, Hornchurch
14.04.2014
for The Public Reviews

A jazz trio in the foyer, and in the road outside, a stunning collection of vintage automobiles to prepare us for the drama within.

In those golden Twenties before the crash and the depression, Jay Gatsby and his charmed circle live out the decadent hedonistic dream in his waterside mansion.

Cut to the Chase are no slouches when it comes to twentieth century classics, and this is a seriously stylish production of what might seem a rather superficial adaptation of a complex many-layered masterpiece. The novel relies on the onlooker/narrator Nick Carraway, sensitively played here by Callum Hughes, and it is through his eyes that we see much of the tragedy unfold. And it is he who reads Scott Fitzgerald's handwritten envoi at the end.

Simon Jessop is a familiar face at the Queen's, but this is his first show as director, and he has certainly seized the opportunity with both hands.

In a bold meta-theatrical prologue, he shows us an empty rehearsal space, bare bricks off-white-washed, fire hose, doors, chairs and staircase all in the same hue. The company wander in, bearing musical instruments and doughnuts, eight characters in search of a read-through.
Introductions over, the “director” gives them a pep talk, demanding of them “conviction and high style”. And boy, do they deliver. Two characters step into the central circle, and the scripts are discarded as we move seamlessly onto that “slender, riotous island”.
Jessop's vision is never realistic, and rarely glamorous. This is Gatsby as Arthur Miller might have told it, drilling down to the raw, deformed emotions at the heart of the piece. The staging is striking: the silent fireworks, the Old Metropole, the lighthouse duologue, the death of Myrtle, Daisy's letter monologue, the “strange enchanted boy” martyred in his swimming pool. The first meeting of Gatsby and Daisy is superbly choreographed as a quartet. There is a see-through cupboard under the stairs for the bedroom scene and the Metropole-dancing.
There is much music, but no production numbers. Instead these actor/musicians provide underscoring, quick cues and snatches of song. Boulevard of Broken Dreams, What Is This Thing Called Love, but also, very effectively, unexpected arrangements of All Saints and Justin Timberlake.
Sam Kordbacheh is an elegant, statuesque Gatsby, enigmatic and unemotional, save for the powerful moment when he loses his temper with Sean Needham's racist asshole Tom Buchanan. Georgina Field gives a wonderfully inebriated Myrtle; Sam Pay is incredibly moving as her wronged husband. The shallow, self-absorbed Daisy is beautifully portrayed by Ellie Rose Boswell, and Alison Thea-Skot is the emancipated golfer Jordan Baker. A great character turn from Stuart Organ as the ageing mobster Meyer Wolfsheim, with his cuff buttons made of human molars.

The lighting is atmospheric; back projection and film are sparingly but tellingly used. And, at the end, silent movie credits not only for the actor/musicians but for every member of this amazing Queen's Theatre company.

Email ThisBlogThis!Share to TwitterShare to FacebookShare to Pinterest
Labels: Cut to the Chase, queen's theatre Hornchurch, THE GREAT GATSBY