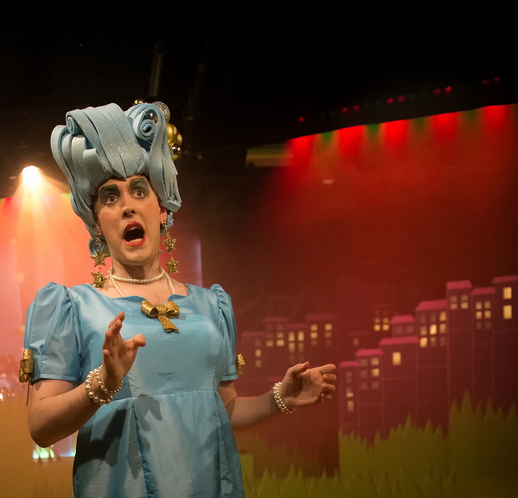 This is the 7th boutique Panto CCO have brought to the Rosemary Branch, and they couldn't have wished for a more enthusiastic audience of “boys and girls”. Crammed into the intimacy of the upper room, they cheered, booed, heckled, sang along and generally gave as good as they got.
In fact, looking around, there's only one child amongst us. But the genius of this not-so-very-alternative panto is that it appeals as much to the wide-eyed innocent as to the seen-it-all cynic.
Very much John Savournin's show, of course. He's directed his own script. Choreographed the production numbers. And plays a lovely Dame, too, butch but cheeky, with an easy rapport with his adoring audience.
“Buttons” re-tells the nation's favourite panto tale with Buttons at its centre. In this version he's a cuddly Teddy Bear, hopelessly in love with Cinders, dreaming of being a real boy. He's given his big chance, not by Geppetto, but by the Fairy Godfather.
There are all sorts of other twists, too, all within the spirit of pantomime. “Into the Woods” springs unbidden to mind, and the opening is very Sondheimy – in Act Two A Little Night Music provides a catchy tune for A Party At The Palace, and Sweeney Todd is there too …
Musically, it's very much a thieving magpie show. The delicate shadowplay before curtain-up is backed by Richard Strauss's Zarathustra [arranged for keyboard, percussion and voices] and Bernstein, Verdi, Thriller, Queen and Carousel are amongst many others pressed into service. Rota for the Godfather, Gunning for Poirot, Sullivan for the patter song.
A strong cast of seven includes many favourites, as well as newcomer Joanna Marie Skillett, excellent as Cinders. Matthew Kellett is Buttons/Buttocks, and Rosie Strobel has a great time strutting and posing as the wicked Prince Charming “Call me Gary...”, the evil mastermind behind the Magic Menace. Nichola Jolley is her suave Dandini, though alas they never get to swap clothes ...
Amy J Payne plays PC Pumpkin, besotted with Betty, and veteran luminary of the lyric stage Simon Masterson-Smith is the Fairy Godfather – think Brando in suspenders and a tutu.
The amiable anarchy of it all is offset by the superb singing – parody and pastiche galore, all delivered, unplugged, by some outstanding voices.
All the traditional panto joys are observed – old jokes, sweet-chucking, birthdays and song sheet. There's even a bake-off [and food fight], in which Juicy James's ambitious bear is rejected in favour of an Angel. Poor James, all the way from “West London”, is the object of Betty Swollocks's amorous attentions. But if you sit so close to the front that your knees brush the tabs …