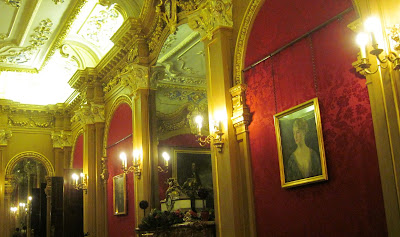 Cameo's long-established Christmas visit to Hylands House had a new look this year. A generous Selection Box of Delights included loads of new material, and musical offerings from Willow's Drum, Mark Barnard and Lyz Le Fay, whose seasonal repertoire ranged from Eartha Kitt to the Coventry Carol by way of the Kinks.
Lindsay Lloyd had put together a heart-warming collection of poems and prose looking at Christmas through the eyes of a child, as well as some pithy observations [and requests] from real kids.
There were Nativity Plays a-plenty, Mole End, Molesworth and Adrian Mole [this last] beautifully captured by Martin Lucas] Eat, Drink and Be Sick [Pam Ayres], Pooh and Piglet in the snow, Hogwarts, cracker jokes, Tolkien's letters from Father Christmas, Paddington Bear and the Five Pence Pudding and Just William's Christmas list.
American classics, too, like The Night Before Christmas and the New York Sun's Yes Virginia editorial, as well as Phyllis McGinley's clever poem about St Nicholas.
More thoughtful moments too: Vicki Tropman's reading of These Are The Greedy Days, and Lois Duncan's Christmas, Present, read by Lindsay Lloyd.

But we were sent home with a smile, thanks to Alan Titchmarsh's potted panto, narrated by Ken Rolf, with Tropman slapping thigh as Aladdin, Lloyd as Twankee, Rick Smith as the camp Genie, Lucas as part-time aerobics instructor Abanazer, and Caroline Ogden cheekily walking on as Cinders and Puss.

I saw the Ghost-of-Christmas Past
Glide by our lighted tree.
Her arms wee filled with dolls and toys,
And all were meant for me.
I sensed the rustle of her skirts.
Her blouse was trimmed with lace,
And when she turned to smile at me
She wore my mother's face.

Just as this vision slipped from sight
I heard my daughter call.
Wild footsteps clattered on the stair;
Shrill giggles filled the hall.
She burst into the gift- filled room
And squealed in glad surprise
And all the Christmases-to-come
Were mirrored in her eyes.

How swiftly fly the rainbow years,
Like splintered shafts of light,
As fragile as the gentle ghosts
Who whisper in the night.
I draw my child into my arms
And hold this moment fast
Against the time my face will be
Her Ghost-of-Christmas Past.