BRITTEN IN NORWICH: OUR HUNTING FATHERS 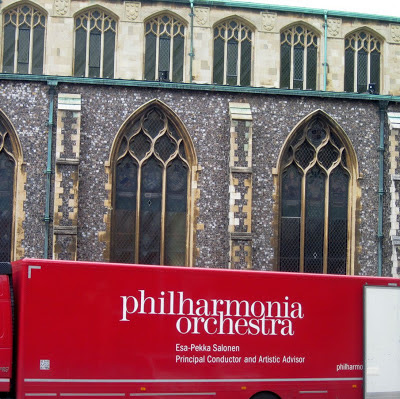 BRITTEN IN NORWICH: OUR HUNTING FATHERS
The Philharmonia at St Andrew's Hall, Norwich
13.05.13
for The Public Reviews

Britten in Norwich – in his centenary year, a concert with a strong spirit of place and a clear narrative progression.

It's given in St Andrew's Hall, where, in 1924, the 10-year-old Ben was "knocked sideways" by the first live orchestral concert he'd attended. Frank Bridge, later Britten's mentor, was conducting his own suite The Sea.

And it is this work which opens the Philharmonia's programme, conducted by David Parry with an impassioned dramatic sweep and expansive flair. Eloquent woodwind in the opening Seascape, the busy zephyrs in Sea Foam, the dreamy moonlight, turning massive and menacing, and the urgent lower brass in the Storm, make for a colourful canvas – easy to see why a musical child could be impressed and inspired.

The other bookend is Britten's own Sea Interludes, possibly his best known purely orchestral work. Excellent playing from the Philarmonia: powerful brass, beautifully phrased string figures at the start of Dawn. The bell notes from the brass could have been better defined in the opening bars of Sunday Morning, the attack at the start of the Storm could have been sharper, but there is wonderful cantabile phrasing from the lower strings, and an impressive, frenetic climax, marked by crisp pizzicatos and side drum.

The Sinfonia da Requiem, composed in 1940, is played with sustained urgency, and a thrilling fortissimo in the Dies Irae. This work shares a pacifist message, and much of its musical vocabulary, with the central work, which gives the concert its title, Our Hunting Fathers, originally given, as here, with a soprano soloist, commissioned by this very Festival in 1936, first conducted in this very hall by the young composer, and met, if not with hostility, then certainly with bewilderment.

The soloist in 2013 is Mary Plazas, who brings sharp definition, and an intensity of feeling to Auden's words – a superbly judged performance. The orchestra responds well, too, especially in the Dance of Death, with its echoes of Mahler, Berg and Shostakovich. After the turmoil and tumult, the lyrical violin of the Philharmonia's leader Magnus Johnston, noble passions, an ironic march and a wry, understated ending.

A memorable concert, given an extra significance by the centenary and the historic connections. Two small caveats – Plazas has excellent diction as well as a fine sense of the dramatic, but it would be helpful to have the text in the programme and enough light to read it by. And [an increasingly common complaint] please don't print a running time unless you can check it. 95 minutes advertised, 122 actually taken.