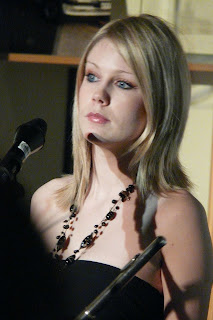 Classical Xtra at the Cramphorn

Flautist Eimear McGeown was born in Northern Ireland, as was the composer of her first piece, Hamilton Harty's elegiac, energetic “In Ireland”, which finished with a joyful jig.

The talented and versatile musician showed her classical credentials with a Fauré test piece and a favourite Bach Sonata.

But most of this recital was devoted to traditional forms and new music, including the première of a Romance by Jeffery Wilson, butterfly flute darting around above the wind-stirred foliage of the piano accompaniment [Aleksander Szram].

Canadian composer Katherine Hoover evoked the wide open spaces in her Kokopeli, influenced by Native American music, and ending with a dying diminuendo, beautifully controlled. Ian Clarke's Hypnosis was predictably soporific, with a minimalist piano part, while his ingenious Great Train Race was an exhilarating exploration of the instrument. The Sonata by French pianist/composer Mel Bonis was a varied, constantly engaging piece, with a delicate accompaniment.

Eimear's Irish flute featured in the gentle Give Me Your Hand, and some toe-tapping reels, whilst her two whistles [one in D, one in B flat] were used for a couple of slip jigs and Mahoney's Reel.

The audience rightly demanded more from these two charismatic musicians, and we were rewarded with Phil Coulter's sentimental Home Away from Home.