Delayed by the blackout, We'll Meet Again brought wartime nostalgia to the Civic once more last week. They are one of the last Concert Parties in captivity, working like Trojans to keep the audience entertained.

These time travellers were here at Easter last year, with an almost identical show: full marks to cheeky chappy Steve Barclay for freshening his act with some new material, including a topical pot shot at Fern Britton.

Fair enough – you can't rewrite the war – Lili Marlene was the only German number, and only in its English version. 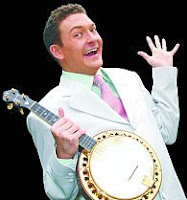 ukelele in his hand, not to mention the fiddle and the banjo, and Tony Layton, recalling the vocal refrains of the Dance Band days.

Seeing the show again so soon, we noticed the tricks and the wrinkles: the voice with no power left at the bottom, the fixed grin and the Archie Rice eyes, the resolutely un-PC gags just the right shade of blue, as the comic worked the mature crowd with consummate skill.

This was the same show as last year - have a look at that review in the archive !