Jim Hutchon was at the Old Court ...

The Last Days of Don Juan. 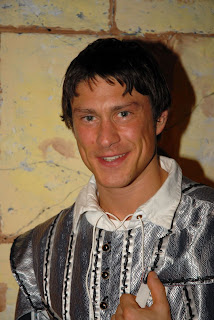 original by Molina. There are massive slabs of dialogue among the large cast that could have been excised to impart more pace and action.

Lionel Bishop is very smooth as the hero who “does what and who he wants”, as he cynically loves and leaves a number of Spanish virgins with the promise of marriage. For the play, four women represent the legendary countless ones. Kelly McGibney is a ruined noblewoman who does a very convincing seduction scene with the naked Don Juan in an eyebrow-raising opening scene.

An innocent fisher girl played with impressive range by Kat Tokely is next for the treatment, followed by Victoria Costa, truly the most ruined of the quartet (despite colluding in a sexual jape with Don Juan’s friend – Robert Bastian) The fourth is Anna Tilmouth, an innocent bride, tricked away from her new bridegroom with the promise of riches and station.

In the end, the hero gets consigned to Hell in a finale that is amongst the most powerful I have seen at the Old Court . A special mention for the murdered Martin Final who makes a comeback as a statue thudding about the stage. This could have been comic but he had the gravitas to pull it off with real panache.

and Robert Tear's heralded its close