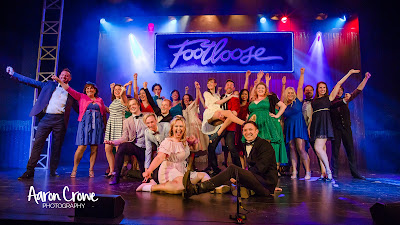 FOOTLOOSE
Springers at the Civic Theatre
15.06.17

The musical of the 80s movie is as popular as ever, with another national tour this year. But Gareth Gates' fans could surely not be more warmly enthusiastic than the audience in the Civic.
Springers give them a colourful, lively show, nicely sung, beautifully dressed, with dance delights a-plenty.
The dialogue is snappy, though the lyrics sometimes get lost in the sounds from Ian Myers' rock-combo pit band.
A quality cast make the most of the opportunities offered, from Mat Smith's sleazeball Chuck to Colin Shoard's sincere but blinkered preacher. Deborah Anderson is outstanding as his long-suffering wife, vocally assured, with a strong stage presence. The Learning to be Silent kitchen trio was one of the best things in the show.
The audience warm to Daniel Schultz's slow-witted Willard, while Alexandra Phillips shines as a superbly sung Rusty.
Jon Newman brings an easy Chicago charm to the role of Ren, the incomer who gets Bomont back on its feet, with Mae Pettigrew as a lovely rebellious Ariel in her scarlet boots. 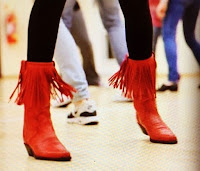 The staging is ambitious, with pews, burger bar and kitchen trucked on, and the lockers flown down. The railway bridge is impressive, too, beautifully lit for Almost Paradise.
And there's plenty of space for those big production numbers – the barbecue, the gym, the junkyard, and of course Holding Out for a Hero, with a trio atop the counter, a chorus of unliberated ladies and superheroes, plus a random hot-dog …
Footloose is directed for Springers by Gary Jarvis and Susan Corina, with choreography by Helen Arber.

hang on what decade are we meant to be in ? the male chorus looks like they had a spending spree in H+M ...