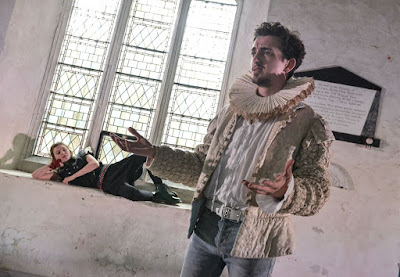 A memorable Shakespeare from the Mercury Young Company.
The tragedy of the star-crossed lovers is well suited to these teenage actors, and considerably enhanced by a high-concept production in an historic setting.
These walls were old when Shakespeare penned his play; St Martin's was already standing when those two noble households squabbled in Lombardy. Beneath the lively feet of the players, do real families lie in long-forgotten vaults?
The action begins on Capel's Monument, with lilies and the statue of pure gold. Above the heads of the lovers, a cascade of folio pages hangs suspended. There is music – three band stations around the church – and movement, with running, dancing and fighting all around us. We, the groundlings, must move from one acting area to the next, gently propelled by the company. And there are many striking stage pictures – couples casually draped in window recesses, in the chancel, where we do not venture, Juliet is several times silhouetted against the East Window as she is dressed for the ball by her nurse, or scolded by her father. The warring factions, moving apart as the Prologue ends, confront each other across the Nave. Romeo lingers on the monument as Juliet watches him depart … “...thou look'st pale...” Stained glass dapples the ancient wall with colour. There is downlight through the hanging pages, uplight through grilles, smoke too – no doubt it all looks very different in the “mask of night”.
So the emphasis in Filiz Ozcan's, inspired, imaginative staging is not always on the text. The music – MD Matt Marks – has many company members turning their hand to the multiplicity of instruments. There's an accordion, a triangle, a harp for mourning, and percussion sticks for the fighting – very effectively done with wooden “fiddlesticks”, and tiny red petals for the blood.
Despite the acoustic (the sung words are largely lost), the verse is clearly delivered, with excellent performances from many in the large cast. Ivy Dillon is a convincingly naïve Juliet, the dashing Peregrine Maturin-Baird gives a superbly assured Romeo. Freya Leslie makes a bold Mercutio, Alfie Lawrence a fine Tybalt, shrugging off his tunic as he leaves the stage – the costumes cleverly blend ancient and modern. Tom Campe impresses as an eloquent Paris. The smaller parts, too, are often tellingly done: Flavia Ferretti's Balthasar, say, or Sophie Chivers' Ghostly Father, dropping his herbs in astonishment, or Jess Cuthbert's lovely Nurse, amply rewarded for her pains by a generous Romeo.