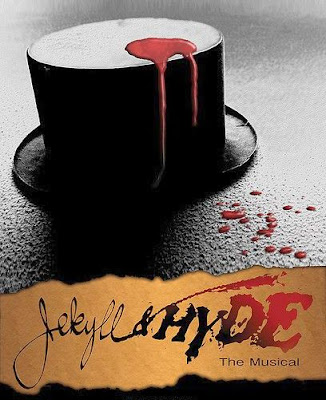 Not everyone's favourite show, Jekyll and Hyde, the musical in which the legendary Leslie Bricusse had a hand back in the 80s. It turns Stevenson's taut, psychological tale into an over-blown melodrama with one good tune, some leaden lyrics and some risible rhymes.
So it was lucky that Shenfield were able to bring a fine cast and skilled creatives to the bachelor party.
David Pridige is the eponymous tortured soul [“You don't seem to be quite yourself tonight, Dr Jekyll...”], switching from good to evil with a change of vocal timbre and a red scarf. He is a ruthless psychopath in this version, frightening ladies in the street and bumping off his enemies in a string of 'orrible murders, including the Bishop of Basingstoke [Lloyd Bonson], bludgeoned to death with his own crozier. Sir Danvers [Bob Southgate], who does die in the book, is spared, though, perhaps because he is to be Jekyll's father-in-law.
The cod-operatic score is well handled for the most part, with impressive work from the two women in the Doctor's life – Emma [Rachel Watson], his betrothed, and Lucy [Kate Smith], a whore he meets on his stag do in the Red Rat, a scene Stevenson somehow omitted, somewhere between La Cage Aux Folles, the Kit Kat Club and the Three Cripples. Their duet - “In His Eyes” - one of the best things in the show.
Solid support from a huge cast of Victorian characters [Alli Smith's Utterson, Jamie Fudge's Stride and David Ward's Herbert to name but three], with excellent use of the stage area and imaginative groupings and choreography: the quartet near the end of Act One, the Murder Murder opening to Act Two and the final tragic tableau, all superbly done. The lighting was starkly effective, especially for Jekyll's very modest laboratory.
Jekyll and Hyde is directed by Kerry McGowan, with Ian Southgate the MD.
on Thursday, June 09, 2016