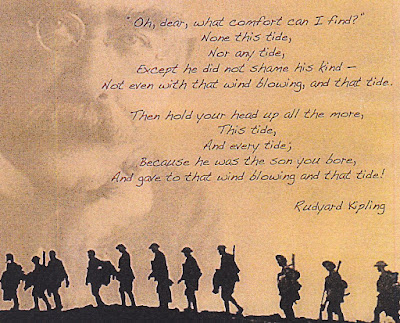 This poignant play tells the true story of Rudyard Kipling's boy John, killed in the trenches when he was still a teenager.
The poet, who pulled strings so that his myopic only son could satisfy his own patriotic urges, is accused by his wife and daughter of sending the boy to certain death.
David Haig's drama is powerful, and superbly constructed. Glenda Abbott's production underlines the dynamic of the plot; especially in the second act, the interplay between the family is skilfully crafted, as Carrie, Kipling's American wife, clutches obsessively at straws, poring over reports and interviews with comrades, and Kipling himself strives to “find the good in it”. “Was he pleased to be there ?” he asks the private from Jack's platoon who witnessed the last fatal attack.
In the first half, the changes of scene slow the action and disrupt the mood a little, but here too the dramatic structure is superb – the medical board chatting about the latest technology as Jack's defective eyesight is about to be revealed, the intruders on the lawn, the children sharing an illicit tipple, foreshadowing the whisky shared later to soften the blow of Jack's death.
The pivotal scene in the trenches is well handled, the Irish squaddies with their awful feet and their pigeon baskets against a swiftly erected dugout.
Most of the scenes take place in the “dark, depressing” drawing room of Bateman's, Kipling's Sussex home, spaciously realised on the Brentwood stage, with fine furnishings and Persian rugs.
The quality of the performances is outstanding. William Wells, who, like the playwright, bears a certain resemblance to Kipling, gives a wonderful period performance, stiff upper lip only occasionally troubled by raw passions. A pause, a turn of the head, express deeper feelings. He ages convincingly, reading stories to his family, and reciting as the play closes the poem he wrote the same year his beloved boy died. Lindsey Crutchett plays his wife, desperate to avert the fate she sees only too clearly for her son, searching desperately through eye-witness accounts long after her husband has tacitly accepted the truth. The lad himself is brilliantly played by Ben Sylvester; we share his frustration, the anguish of rejection, his longing to leave the family home behind. And his vulnerability, his pathetic youthfulness, is palpable. He is killed weeks after his eighteenth birthday.
Strong support from Eleanor Burgess as Jack's older sister, and Gary Ball as the shell-shocked soldier who brings a halting, haunting account of Jack's death into the tranquillity of the sitting room. He is persuaded to do so by an engagingly awkward friend, perfectly done by Darren Hannant. Sam Thorley and Andrew Spong join Ball in the fragile camaraderie of battle, and the top brass on the medical board are Alan Thorley and James Biddle.
A very impressive production of a timely, touching piece, directed with style and sensitivity and played to perfection by a fine acting company.


image from the programme design by Paul Sparrowham