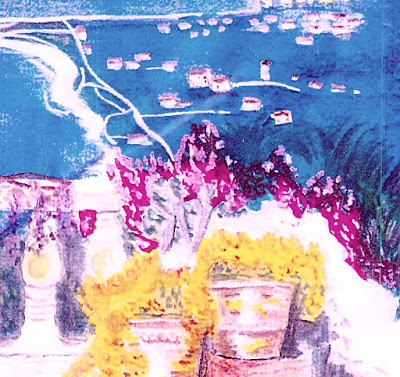 Elizabeth von Arnim's charming novel was a popular success in the 20s – this stage version by Matthew Barber made something of a Broadway hit some eighty years later.
It's a sentimental piece, in which four ladies from the capital's middle classes, united by a longing for wisteria and sunshine, find both, and themselves, in San Salvatore.
There are nine scenes before the interval, four after. Barber suggests that the actors, or costumed servants, should manage the props. Difficult to achieve, but otherwise, as here, even an efficient stage crew will slow the action and lose the flow. He also suggests that the sea and the gardens should be imagined out behind the audience, presumably leaving warm stone-work and wisteria as a back-drop. Pete Goodwin's design effectively replaces the dull black and brown of London with a riot of colour for the Genoese coast, earning a round of applause for the big reveal after the interval. And the incessant sound of English rain is replaced by continental railways as Italy approaches.
Two very different ladies plot their escape. Jodee Goodwin's Pollyanna Lotty and Leila Francis's “disappointed Madonna” Rose, nicely contrasted in Nick Caton's production. A much more dramatic contrast between the other two women, who answer the advertisement to share the cost of the castello. “Donna Carolina”, Lady Bramble, is an elegant butterfly, played with some style and fabulous frocks by Shelley Goodwin, and the redoubtable Mrs Graves, delightfully done by Liz Curley, as she sheds her hat, her stick and her inhibitions in the Italian sunshine.
The owner of the villa is Chris Rogerson, Costanza the volatile maid, Sharon Goodwin.
The menfolk who eventually join the ladies in Liguria are Arnott, alias Florian Ayres, writer of “romantic biography” [Jeremy Pruce] and Wilton, a scene-stealing Daniel Curley, plucking his nasal hair and only just preserving his dignity with a bath towel. And his Italian, at least, was meant to sound mangled …
Some fine performances here, with Lotty's character sympathetically developed. But the middle-class metropolitan milieu sometimes proved elusive, and on opening night there was some insecurity in lines and names.
The ever-resourceful refreshment team had come up with Paradiso Punch this time, limoncello the secret ingredient.
on Sunday, June 28, 2015