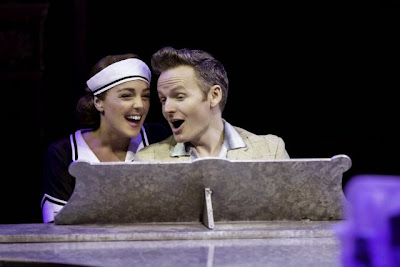 
The Swell Party starts, after a lengthy pre-show, with a party piece. Joe Stilgoe, son and heir of Richard, is left alone at the on-stage grand to show off by asking the audience for tunes to weave into virtuoso variations.
Take Five, George Michael, O Mio Babbino Caro, Moon River – a great medley, and a hard act to follow, frankly. Especially as High Society is no Anything Goes. A compendium piece, with Cole Porter numbers from various eras, and a Philadelphia Storyline about the romantic tangles of the Long Island idle rich.
Maria Friedman's slick, inventive staging uses the tiny performance area – about the size of an ocean liner dance floor, audience on all four sides – with movement and magic, highlighting some excellent period performances. Kate Fleetwood is socialite Tracy Lord, whose ex [a brilliant Rupert Young] turns up on the eve of her wedding to wooden, humourless Kittredge [Richard Grieve]. The plot is charmingly thickened by two undercover journalists – Jamie Parker and Anabel Scholey. Many stellar performances further down the bill, too, from Ellie Bamber as the tomboy younger Lord sister, Barbara Flynn as their mother, and a bearded Jeff Rawle twinkling away like Dickie Attenborough as tipsy Uncle Willie.
The chorus comment on the action, shift the furniture, and cook a sunnyside-up breakfast grill at the side. The curtain calls have not only brilliant choreography but even a musical backing synchronized with the characters.
Two stand-out numbers among so many standards [and the odd archaeological specimen] – True Love, with the eponymous model boat on the projected pool and later in the circle as the stalls seemingly fill with water, and a stunning Let's Misbehave, with Stilgoe joining MD Theo Jamieson at two pianos, and Nathan M Wright's choreography including a tap routine on the lid of the grand.
I've high hopes of Chichester's two musicals for 2015, but I'm not sure that even they can come up with a production number to beat that memorable Let's Misbehave.
on Tuesday, May 19, 2015