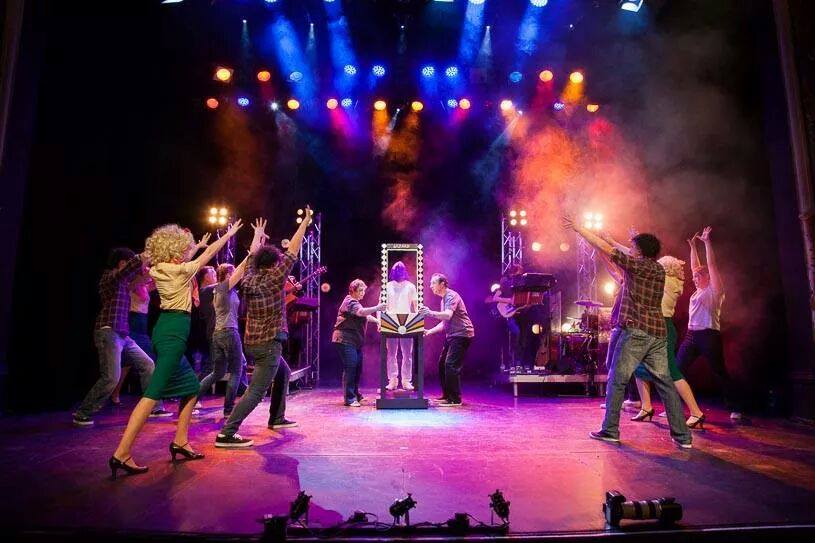 LODS at the Palace Theatre, Westcliff


Like Bach's Passions, this is an iconic musical work, long thought to be unstageable.
It's twenty years now since the Broadway run, and despite the many challenges, the album makes a satisfyingly dramatic stage show.
Mark Valencia's exciting, inventive production for LODS wisely lets the music speak – MD Ashton Moore heads a youthful stage band, fronted by two excellent guitarists. They're a constant presence, of course, but come to the fore in I'm Free, and in the Underture at the top of Act Two: a real rock concert moment, this, with banks of stage lights sprayed all over the Edwardian interior.
The stage boxes are cunningly used, too, in a Brechtian breach of the fourth wall.
The design is strong but simple – bold graphics and brilliant projection. Technology has now made this an effective weapon in the designer's arsenal, embraced by the Royal Ballet amongst many others. The WWII montage, parachutes behind Mrs Walker's pregnancy, the smashed mirror, the 3D animation for the arcade machine. Only the handheld videocam underwhelmed – a lot of cable for not much impact.
Stylistically the show is omnivorous. Was it the gold jacket that reminded me of Lloyd Webber, especially in the first Tommys duet. And a hint of Godspell in Welcome - “Come to this house ...” Musically too – the carol singers were pure Glass, I thought. And none the worse for that.
The narrative – more logical, less anarchic than the album – is clear and uncluttered. Simple mime scenes carry the story forward, at the beginning, in particular, where it's vital to know who's who and what's happening.
And the show is packed with bright ideas – Cousin Kevin cubed [three superbly physical performances], matched by a trio of Local Lasses. A floppy puppet [Gemma Crofts] for the older child, making Uncle Ernie's fiddling even more chilling. The three lads air-guitaring the big number the first time it's heard. The chorus holding flashing lights for the pinball bumpers. The sleepers awakened and looking up to the heavens in the finale. And a strange blue hood to represent Tommy's isolation from the world of the senses.
The older Tommy is an impressive Glenn Sanderson – active and introspective by turns, with a versatile singing voice. The sight of him twitching and trembling – part of the machine – makes a viscerally impactful ending to the first act.
Supported by a committed cast of characters – Sarah Kelleway touching as Tommy's mum, Helen Sharpe outstanding as the Acid Queen, Steve Wilding a shameless Uncle Ernie, and when I saw the show, Freddie Sharpe a confident little Tommy.
We are promised “gunfire and occasional swearing”. Not to mention catatonia, child abuse and a courtroom full of zombies. And yet this trailblazing rock opera from the Sixties somehow makes a musical to appeal to all generations, whilst still preserving Townshend's raw, passionate iconoclasm. And those timeless tunes …

Email ThisBlogThis!Share to TwitterShare to FacebookShare to Pinterest
Labels: LODS, palace theatre westcliff, THE WHO'S TOMMY