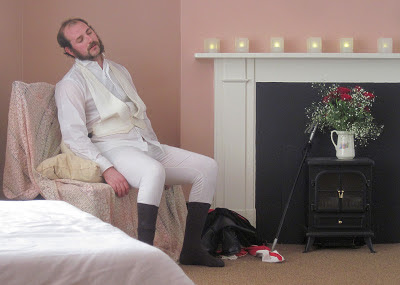 
In one of the most audacious stagings I've ever seen in the non-professional sector, New Venture take us right inside the hypocritical world of fin-de-siècle Vienna, rubbing shoulders with the deceiving and the deceived - a never-ending circle of desire.
Arthur Schnitzler knew his play could never be staged; he would surely have approved the startling, sometimes disturbing intimacy of this version – eight actors guide us from one scene to the next in the round dance of casual sexual encounters, played out in the Georgian rooms of Fairkytes.
As director Sara Thompson points out, the thing about a circle is that you can start anywhere, and you will always end up where you first began. So I find myself first in the company of a young wife [Victoria Abery], in the matrimonial bedroom, reading Stendhal On Love, and later reliving her honeymoon and "revisiting Venice" with her boring, brilliantined husband [Matthew Jones]. And ends with her in a love nest with Alfred [Craig Whitney], and Stendhal again.

On the way round, we look in on a cottage in the country, a bordello, a writer's studio and a chambre séparée. In each, the audience is formed of two groups of voyeurs, one invited by him, the other by her. Each group will be party to knowledge denied the other. Occasionally we hear distant quarrels and climaxes from other scenes. We witness love made on a Persian rug, up against a wall, atop a fire escape, behind a bush. These erotic encounters are brief, and, especially for the woman, deeply unsatisfying. The tinkling bell tells us it's time to move on, and all the while the sound of Strauss to carry us round the corridors.
Madame Lise [Lisa Matthews] is our lubricious hostess; the anteroom to her "Audience House" has chilled wine, erotic prints and a sound-track of Wiener Bonbons. [The real, edible bonbons will have to wait till that last encounter …].
All eight actors seem to cope magnificently with the challenges – chatting to their charges, asking for help, improvising ["I had that Renoir the other day," muses Léocadia] to ensure smooth transitions. Every one of them gave an excellent performance, assured even in these intimate surroundings. Special mention for Darren Matthews' study in literary lasciviousness as the poet/pianist/playwright, Neil Gray's bewhiskered Count and Lin Pollitt as the exotically accented actress.


This superbly realised production, and its inspired concept, are a triumph of theatricality and psychological insight. The audience is entertained, but also involved in the seductive structure: like the inevitable infections for which the play is often seen as a metaphor, we are transmitted from one partner to the next, in a never-ending round of bodily pleasure – shallow, shameful, superficial. Just as relevant in our enlightened society as it was in the buttoned-up world of Freud, Klimt and Mahler. 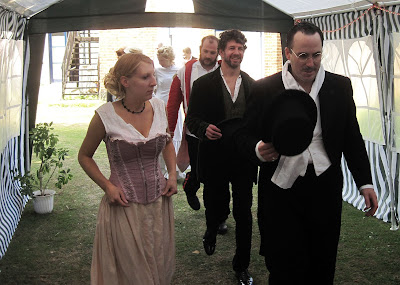