PETER RABBIT AND HIS FRIENDS 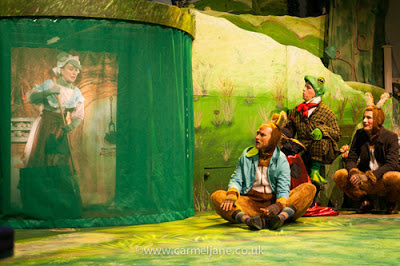 PETER RABBIT AND HIS FRIENDS
at Brentwood Theatre
15.12.2012

More tales from Beatrix Potter at the Brentwood Theatre; an intimate, innocent world of talking, singing animals, where the only humans are the grumpy McGregors, little Lucie and Miss Potter herself – Deborah Luery this year, writing her stories at the side of the stage, sketching her friends, "the wild ones, the tame ones", and showing us the pictures right at the end.

The tiny acting space is cleverly extended by using upper levels to suggest the countryside; Potter's own artwork adds authenticity. The adaptation, by Adrian Mitchell with music by Stephen McNeff, manages to be sophisticated and charming whilst keeping some very young children entertained. Some of the songs, in particular, were pleasingly ambitious – I liked the Blackberries song, and Mr McGregor's number, very well sung by Andrew Nance. Mia Keadell gives three lovely characters, including a pipe-smoking Mrs McGregor, Sophie Farquar plays a couple of insects and a sleek White Cat. Jackson Pentland drags up for that "excellent clear-starcher" Mrs Tiggywinkle, and Peter himself is played with energy and panache by Nicholas Rutherford. I should also mention the various cuddly puppets [Liz Southgate] who spy on the action, offer their advice, and join in the choruses.

Peter Rabbit is directed by Ray Howes, with Ian Southgate in charge of the music. It is a Brentwood Theatre Production, co-produced by David Zelly and Vivid Musical Theatre.
on Thursday, December 20, 2012